The Complete Francis of Assisi: His Life, The Complete Writings, and The Little Flowers (Paraclete Giants) (Paperback) 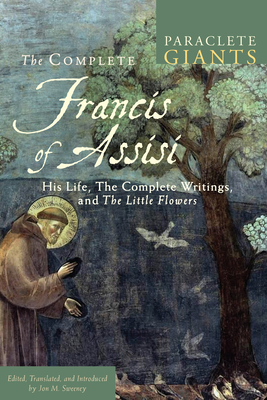 The Complete Francis of Assisi: His Life, The Complete Writings, and The Little Flowers (Paraclete Giants) (Paperback)


Not On Our Shelves—Ships in 1-5 Days
There are many editions of the writings of St. Francis, and biographies about him, but here in one volume are both, plus the complete text of the late medieval work, The Little Flowers, which did more to establish the legend of the man than any other work. This "Paraclete Giants" edition includes the complete Road to Assisi, Paul Sabatier's ground-breaking and foundational biography of the saint, first published in French in 1894 and re-issued and expanded in 2002; the complete Francis in His Own Words: The Essential Writings; and The Little Flowers, thus offering the best introduction to St. Francis yet available between two covers. Other Paraclete Giants include The Complete Julian of Norwich and The Complete Introduction to the Devout Life, both translated and introduced by Fr. John-Julian, OJN.
Jon M. Sweeney is an author, husband, and father of four. He has been interviewed on many television programs including CBS Saturday Morning, Fox News, and PBS's Religion and Ethics Newsweekly. His popular history The Pope Who Quit: A True Medieval Tale of Mystery, Death, and Salvation was optioned by HBO. He's the author of thirty-five other books, including The Complete Francis of Assisi, When Saint Francis Saved the Church, the winner of an award in history from the Catholic Press Association, and The Enthusiast: How the Best Friend of Francis of Assisi Almost Destroyed What He Started. Sweeney is also the author of The Pope's Cat series for children. He presents often at literary and religious conferences, and churches, writes regularly for America in the US and The Tablet in the UK, and is active on social media (Twitter @jonmsweeney; Facebook jonmsweeney).
“It’s difficult to think of a saint more widely recognized and beloved than Francis of Assisi (1181–1226 CE). Sweeney (When Saint Francis Saved the Church) has brought together Paul Sabatier’s important 1894 biography of the saint and almost all of Francis’s own writings and prayers including the classic The Little Flowers, an early anthology of anecdotes, teaching tales, and legends about Francis and the first generation of his followers. The author has annotated Sabatier’s work, and the translations and arrangement of the material are also his. VERDICT It is immensely valuable to have in one volume the key writings by and about Francis and his first disciples; essential for libraries and individuals looking to expand their knowledge of this influential saint.” —Library Journal, Starred Review
“Francis’s Essential Writings is of the most historical interest to me. Here is Francis in his own words–letters, prayers and monastic rules. These are important documents of the early Franciscan movement. Sweeney’s introductions and comments provide context for each piece of writing. The Little Flowers is well known and well loved. What sets this edition apart from others (other than Sweeney’s translation) is their arrangement. Sweeney places these stories in what he thinks is their most straightforward chronological rendering (rather than the traditional order). Anyone interested in Francis and the movement he founded will love this volume. If you do not have any Francis on your shelf, this is a good deal. I give it five stars.” —James Matichuk, thoughts, prayers & songs


“The Complete Francis of Assisi is actually a collection of three books between two covers. Sweeney edited the material of three classic Francis texts and brought them together in one convenient location. The individual titles that constitute this single work on Francis are Road to Assisi, Francis of Assisi in His Own Words: The Essential Writings, and The Little Flowers. This four hundred-page book may seem daunting considering it seeks to introduce a simple and unassuming man of God, but the reader will soon be captivated by the message and transformed in heart. The reader will discover the man Francis, his writings, and his living legacy. Sweeney does an admirable job introducing, annotating, and contemporizing each of the three classic French texts. It should also be noted that this title is part of a new series created by Paraclete Press called Paraclete Giants which specifically gathers the materials that profile the life, deeds, and words of Catholic luminaries in one place. The Complete Francis of Assisi is recommended for all libraries seeking to update some classic texts.” —John Leonard Berg, Catholic Library World

“Saint Francis of Assisi is easily one of the most recognized saints, right up there in popularity and appealing warmth with Santa Claus. The Complete Francis of Assisi seeks to create a loving, inspiring portrait of the man who abandoned his father’s riches to wander the Italian countryside, ministering to lepers and preaching to birds. The book is actually three books in one: a gentle biography, a selection of writings by the saint himself, and a collection of medieval tales meant to popularize his legacy. Readers won’t find anything that drastically changes their perceptions of the lover of Lady Poverty, who nicknamed his own body Brother Ass, and the inclusion of three separate books means that some anecdotes are repeated. But the editor-translator’s clear love for his subject shines through, and the readers are left feeling they have spent some quality time with the man who continues to inspire us to contemplate abandoning our worldly possessions. In the company of a man like Francis, it seems like a good idea.” —Christine Engel, Booklist