The Odor of Violets: A Duncan Maclain Mystery (Paperback) 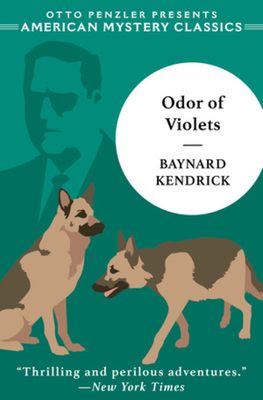 The Odor of Violets: A Duncan Maclain Mystery (Paperback)

By Baynard Kendrick, Otto Penzler (Introduction and notes by)

In the early days of WWII, a blind detective follows unseen clues to solve a murder and undermine a German spy plot.

Meet Captain Duncan Maclain. Blinded during his service in the first World War, Maclain made up for his lack of vision by sharpening his other senses, achieving a mastery of the subtle unseen clues often missed by those who see only with their eyes. Aided by his dogs Schnucke and Driest, the Captain puts the intelligence-gathering techniques he learned in the Army to work, making a name for himself as New York City’s most sought-after private detective. Now it’s 1940, there’s a second World War breaking out, and Maclain is pulled into a case unlike any he’s investigated before.

The murder of an actor in his Greenwich Village apartment would cause a stir no matter the circumstances but, when the actor happens to possess secret government plans, and when those plans go missing along with the young woman with whom he was last seen, it’s sensational enough to interest not only the local police, but the American government as well.

Maclain suspects a German spy plot at work and, in a world where treasonous men and patriots are indistinguishable to the naked eye, it will take his special skills to sniff out the solution.

Reissued for the first time in over a half-century, Odor of Violets is the most well-known installment in the long-running Duncan Maclain series, which featured one of crime fiction’s earliest disabled detectives. The novel, filmed in 1942 as Eyes in the Night, is a classic hybrid of mystery and espionage fiction.

Baynard Kendrick (1894-1977) was one of the founders of the Mystery Writers of America, later named a Grand Master by the organization. After returning from military service in World War I, Kendrick wrote for pulp magazines such as Black Mask and Dime Detective under various pseudonyms before creating the Duncan Maclain character for which he is now known. The blind detective appeared in twelve novels, several short stories, and three films.

Otto Penzler, the creator of American Mystery Classics, is also the founder of the Mysterious Press (1975); Mysterious Press.com (2011), an electronic-book publishing company; and New York City’s Mysterious Bookshop (1979). He has won a Raven, the Ellery Queen Award, two Edgars (for the Encyclopedia of Mystery and Detection, 1977, and The Lineup, 2010), and lifetime achievement awards from Noircon and The Strand Magazine. He has edited more than 70 anthologies and written extensively about mystery fiction.
Thrilling and perilous adventures.
— New York Times

Kendrick keeps his concept believable, while tossing in enough action and surprises to keep the pages turning. This is an outstanding addition to the American Mystery Classics series.
— Publishers Weekly STARRED REVIEW