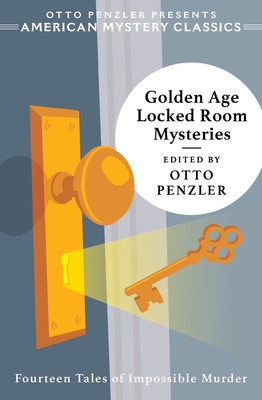 Fourteen impossible crimes from the American masters of the form

For devotees of the Golden Age mystery, the impossible crime story represents the period’s purest form: it presents the reader with a baffling scenario (a corpse discovered in a windowless room locked from the inside, perhaps), lays out a set of increasingly confounding clues, and swiftly delivers an ingenious and satisfying solution. During the years between the two world wars, the best writers in the genre strove to outdo one another with unfathomable crime scenes and brilliant explanations, and the puzzling and clever tales they produced in those brief decades remain unmatched to this day.

All of these and more can be found in Golden Age Locked Room Mysteries, selected by Edgar Award-winning mystery expert and anthologist Otto Penzler. Featuring a delightful mix of well-known writers and unjustly-forgotten masters, the fourteen tales included herein highlight the best of the American impossible crime story, promising hours of entertainment for armchair sleuths young and old.

Otto Penzler, the creator of American Mystery Classics, is also the founder of the Mysterious Press (1975); Mysterious Press.com (2011), an electronic-book publishing company; and New York City’s Mysterious Bookshop (1979). He has won a Raven, the Ellery Queen Award, two Edgars (for the Encyclopedia of Mystery and Detection, 1977, and The Lineup, 2010), and lifetime achievement awards from Noircon and The Strand Magazine. He has edited more than 70 anthologies and written extensively about mystery fiction.
The greatest feat of prestidigitation here, in fact, may be the lack of overlap... Lock your door and enjoy.
— Kirkus

Superb . . . This is a perfect introduction for those new to this particular subgenre.
— Publishers Weekly STARRED REVIEW