The Bigger They Come: A Cool and Lam Mystery (Paperback) 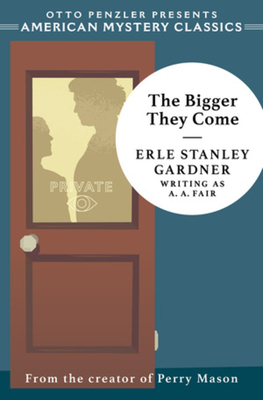 The Bigger They Come: A Cool and Lam Mystery (Paperback)

Bertha Cool is the gruff, tough-talking, corpulent head of her private detective agency, opened after the death of her husband; Donald Lam is her meek, slight, and nervy new hire, who makes up for a lack of boldness with brilliant deductive work. The duo couldn’t be any more dissimilar but, with their skills combined, they are an unstoppable force when it comes to solving crimes, as evidenced by their over two dozen successes in the long-running series penned by Perry Mason creator Erle Stanley Gardner.

In this, their first outing, Donald Lam is tasked with delivering divorce papers to a man who reportedly made a fortune in rigged slot machines. The only problem is that nobody—not even the police—can find him. Before long, Lam’s seemingly-simple assignment finds him caught up in a web of money, mysterious safety deposit boxes, and a gang of toughs every bit as desperate as he is to find the runaway husband.

Reissued for the first time in decades, and originally published under the A.A. Fair pen name, The Bigger They Come is an enjoyable private eye novel replete with puzzling scenarios and a humorous tone. As fast and twisty as anything Gardner ever wrote, the novel (and the series it spawned) is more Paul Drake than Perry Mason, but it is sure to please any fan of the Golden Age whodunnit.

Includes discussion guide questions for use in book clubs.

Erle Stanley Gardner (1889-1970) was the best-selling American author of the 20th century, mainly due to the enormous success of his Perry Mason series, which numbered more than 80 novels and inspired a half-dozen motion pictures, radio programs, and a long-running television series that starred Raymond Burr. Having begun his career as a pulp writer, Gardner brought a hard-boiled style and sensibility to the early Mason books, but gradually developed into a more classic detective story novelist, showing enough clues to allow the astute reader to solve the mystery. For more than a quarter of a century he wrote more than a million words a year under his own name and numerous pseudonyms, the most famous being A.A. Fair.

Otto Penzler, the creator of American Mystery Classics, is also the founder of the Mysterious Press (1975); Mysterious Press.com (2011), an electronic-book publishing company; and New York City’s Mysterious Bookshop (1979). He has won a Raven, the Ellery Queen Award, two Edgars (for the Encyclopedia of Mystery and Detection, 1977, and The Lineup, 2010), and lifetime achievement awards from Noircon and The Strand Magazine. He has edited more than 70 anthologies and written extensively about mystery fiction.
The reader will scarcely learn to admire any of the characters in this story, but he will have to admit that they lead exciting lives
— New York Times

As talented a pair of workers as detective fiction has produced for some time.
— Detroit News

A tough, outspoken tale in the Hammett manner, but with copious excellencies peculiarly its own.
— S. S. Van Dine