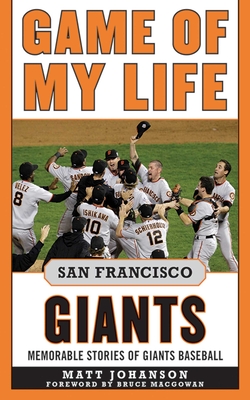 
Special Order—Subject to Availability
The history of the 2010 World Series champions as told by their most heroic players—Willie Mays, Bob Brenly, Dave Dravecky, JT Snow, Will Clark, and more!.

Orlando Cepeda breaks into the majors with a home run. Willie Mays drills four homers in a single game while sick to his stomach. Felipe Alou prays for a ninth-inning miracle with the National League pennant on the line.

In Game of My Life San Francisco Giants, you’ll experience the exceptional moments of fan favorites Will Clark, Rich Aurilia, Robby Thompson, and Rod Beck, as well as current stars like Tim Lincecum, described in their own words as only they remember them.

No real Giants fan will want to miss the stories told here. They are the best of the best from The Bay Area Bombers!