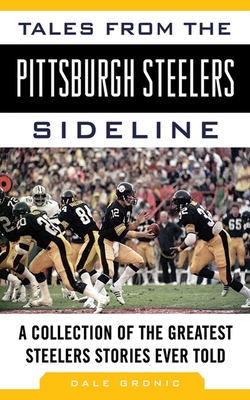 
Special Order—Subject to Availability
One of the oldest teams in the NFL, the Pittsburgh Steelers have carved one of the most exciting legacies in professional football. Founded as the Pittsburgh Pirates by Art Rooney in 1933 with winnings from a single day at the racetrack, the Steelers spent the next 40 years as the NFL’s “Lovable Losers.” All that changed in the early ’70s, as savvy draft choices and a smashmouth style of play transformed the Steelers into the most dominant team of the decade.

In Tales from the Pittsburgh Steelers Sideline, veteran journalist Dale Grdnic captures the essence of the Steelers teams across the decades. Grdnic highlights many of the squad’s most memorable moments, including Franco Harris’s Immaculate Reception and their eight Super Bowl appearances. He covers the team’s greatest rivalries, including the epic battles with the Oakland Raiders and Dallas Cowboys. And he profiles the memorable players who’ve worn the Black and Gold over the decades, including Byron White, Johnny “Blood” McNally, Terry Bradshaw, Lynn Swann, Mean Joe Greene, Jack Lambert, Jerome Bettis, and “Big Ben” Roethlisberger.

The latest addition to the Tales series, this is a must-have book for any member of Steelers Nation.