Tales from the Florida State Seminoles Sideline: A Collection of the Greatest Seminoles Stories Ever Told (Hardcover) 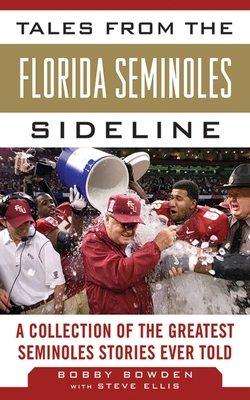 Tales from the Florida State Seminoles Sideline: A Collection of the Greatest Seminoles Stories Ever Told (Hardcover)


Special Order—Subject to Availability
For thirty-three years, Bobby Bowden was the heart and soul of Florida State football. Now Seminoles fans of every generation will get to relive the glory and passion of Florida’s winningest coach in this edition of Tales from the Florida Seminoles Sideline. In this gripping narrative, Bobby Bowden and Steve Ellis bring readers right up to the sideline to experience pivotal moments in Florida’s football history. From Bowden’s first winning season to the national championship victories in 1993 and 1999, into the new millennium and beyond, Tales from the Florida Seminoles Sideline has it all. Bowden relives the pride and competition he felt as he faced his son in the famous Bowden Bowls, and shares his innermost thoughts as he revolutionized collegiate sports. Without a doubt, this is a must-have for any Seminoles fan.
Bobby Bowden began his coaching career in 1954 as assistant football coach and head track and field coach at Howard College. He then transitioned fully into football and became head coach of Florida State in 1976. During his tenure with the Seminoles, Bowden garnered a record 377 wins, the most all-time wins by any Division I-FBS coach. Bowden was inducted into the College Football Hall of Fame in 2006 and retired in 2009.

Steve Ellis was a sportswriter who covered the Florida State Seminoles for more than 20 seasons. He won numerous awards, both at the state and national level, for his coverage. Prior to joining the Tallahassee Democrat, Ellis was a founding writer and editor for the Osceola, a weekly publication dedicated to Seminoles athletics. He passed away in 2009.