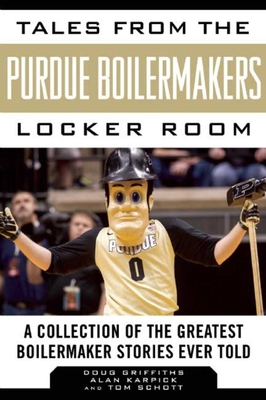 
Special Order—Subject to Availability
The history of Purdue athletics is sometimes funny, sometimes poignant and triumphant, and often pretty amazing—but always uniquely human. Along the way many characters have arisen in over twelve decades of competition and nearly two hundred of these great stories are chronicled in this book, first published in 2003. On the hardwood, readers will learn why Purdue turned down its first opportunity to play in the NCAA Tournament, allowing archrival Indiana to win the 1940 title and how the first “Big Dog” in Purdue men’s basketball history wasn’t Glenn Robinson. From the football sidelines, the authors reveal the dramatic incident that almost cost the lives of Rose Bowl heroes Bob Griese and George Catavolos at the 1967 Hula Bowl. Also, readers will find out how long-time New York Yankees’ owner George Steinbrenner became an assistant coach for the Purdue football team and a quarter century later was instrumental in luring the Boilermakers’ NCAA Final Four coach away from Purdue. Included are the stories of Purdue’s national championship teams, including the 1961 golf team, which was led by a player who never lost to golfing legend Jack Nicklaus, and the triumphant story of the 1999 Purdue women’s basketball team surviving three coaching changes en route to a national title. Readers will enjoy stories from some of the colorful characters in the school’s past: Mike Alstott, Lin Dunn, Gene Keady, George King, Ward “Piggy” Lambert, Jack Mollenkopf, Michael “Scooby” Scearce, Moose Skowron, and Joe Tiller—to name a few. And you will travel back to the early days and the origins of Boilermaker sports and continue through the digital age, following the likes of Heisman Trophy hopeful Drew Brees and many more Boilermaker legends.

Skyhorse Publishing, as well as our Sports Publishing imprint, are proud to publish a broad range of books for readers interested in sports—books about baseball, pro football, college football, pro and college basketball, hockey, or soccer, we have a book about your sport or your team.

Whether you are a New York Yankees fan or hail from Red Sox nation; whether you are a die-hard Green Bay Packers or Dallas Cowboys fan; whether you root for the Kentucky Wildcats, Louisville Cardinals, UCLA Bruins, or Kansas Jayhawks; whether you route for the Boston Bruins, Toronto Maple Leafs, Montreal Canadiens, or Los Angeles Kings; we have a book for you. While not every title we publish becomes a New York Times bestseller or a national bestseller, we are committed to publishing books on subjects that are sometimes overlooked by other publishers and to authors whose work might not otherwise find a home.
Douglas Griffiths, a 1991 Purdue graduate, is a sports writer at Plymouth Pilot News. He was previously an assistant editor at IndySportsLegends.com, as well as a writer for Nebraska’s Huskers Illustrated and an editor of Gold & Black Illustrated.
Tom Schott has been a part of Purdue’s athletics department communications team since 1990. Most recently, he has served as the associate athletics director, a position he has held since 2011. He is the author of the Purdue University Football Vault.
Alan Karpick, a graduate of Purdue, is the president/publisher of Gold & Black Illustrated and GoldandBlack.com. He is the author of Boilermaker Basketball: Great Purdue Teams and Players.