Pirates By the Numbers: A Complete Team History of the Bucs By Uniform Number (Paperback) 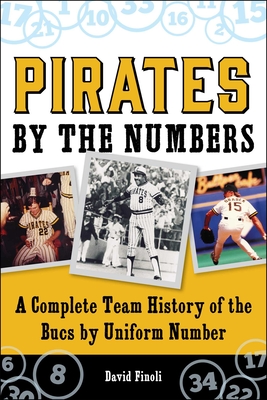 Pirates By the Numbers: A Complete Team History of the Bucs By Uniform Number (Paperback)


Special Order—Subject to Availability
When the National League decided on June 22, 1932, to place numbers on the backs of uniforms to make it easier for fans to follow their favorite players, no one knew at the time just what a landmark decision it would turn out to be. In fact, when the Pittsburgh Pirates donned numbered jerseys eight days later against the St. Louis Cardinals at Forbes Field, the uniform numbers were so unimportant on the team’s list of priorities that it was second billing to the main event of that day: the first Ladies Day in Pirates history.

The secondary event would turn out to be an iconic moment in baseball history, as players are now closely associated with their uniform numbers. For example, two Hall of Famers for the Pirates wore the number 21: Arky Vaughan and Roberto Clemente. Both ironically died young while trying to help others, and 21 has become the most sacred number in Steel City sports lore.

Pirates by the Numbers tells the tales of these players and more in a format that will include the greatest players to wear a specific number, the worst, and the most unique. The book highlights the first players to wear particular numbers and how they performed in their inaugural games, the first to hit home runs, and the first pitchers to win games. You’ll also find a list by year of every player and the numbers he’s worn that fans have used to identify him over the past eighty-four years.

The players of the Pittsburgh Pirates have worn eighty-one different numbers. This book tells each player’s stories in a unique and compelling way that every Pirates fan will love.

Skyhorse Publishing, as well as our Sports Publishing imprint, are proud to publish a broad range of books for readers interested in sports—books about baseball, pro football, college football, pro and college basketball, hockey, or soccer, we have a book about your sport or your team.

Whether you are a New York Yankees fan or hail from Red Sox nation; whether you are a die-hard Green Bay Packers or Dallas Cowboys fan; whether you root for the Kentucky Wildcats, Louisville Cardinals, UCLA Bruins, or Kansas Jayhawks; whether you route for the Boston Bruins, Toronto Maple Leafs, Montreal Canadiens, or Los Angeles Kings; we have a book for you. While not every title we publish becomes a New York Times bestseller or a national bestseller, we are committed to publishing books on subjects that are sometimes overlooked by other publishers and to authors whose work might not otherwise find a home.
David Finoli is a sportswriter from Monroeville, Pennsylvania, where he lives with his wife and three children. A graduate of Duquesne University, he has penned six other books, including The Pittsburgh Pirates and The Birthplace of Professional Football: Southwestern Pennsylvania. Finoli has also contributed to Pittsburgh magazine and the Pirates game day program.