A New Buddhist Path: Enlightenment, Evolution, and Ethics in the Modern World (Paperback) 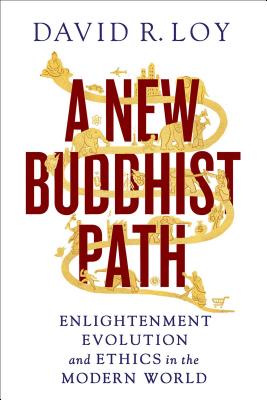 A New Buddhist Path: Enlightenment, Evolution, and Ethics in the Modern World (Paperback)


Special Order—Subject to Availability
Engage with a new vision of Buddhism and the modern world with the bestselling author of Money Sex War Karma: Notes for a Buddhist Revolution. David R. Loy addresses head-on the most pressing issues of Buddhist philosophy in our time. What is the meaning of enlightenment--is it an escape from the world, or is it a form of psychological healing? How can one reconcile modern scientific theory with ancient religious teachings? What is our role in the universe?
Loy shows us that neither Buddhism nor secular society by itself is sufficient to answer these questions. Instead, he investigates the unexpected intersections of the two. Through this exchange, he uncovers a new Buddhist way, one that is faithful to the important traditions of Buddhism but compatible with modernity. This way, we can see the world as it is truly is, realize our indivisibility from it, and learn that the world's problems are our problems. This is a new path for a new world.
David R. Loy's books include the acclaimed Money, Sex, War, Karma: Notes for a Buddhist Revolution; The Great Awakening: A Buddhist Social Theory; The World Is Made of Stories; A Buddhist Response to the Climate Emergency; and The Dharma of Dragons and Daemons, a finalist for the 2006 Mythopoeic Scholarship Award. He was the Besl Professor of Ethics/Religion and Society at Cincinnati's Xavier University and is qualified as a teacher in the Sanbo Kyodan tradition of Japanese Buddhism. His articles appear regularly in the pages of major journals such as Tikkun and Buddhist magazines including Tricycle, Turning Wheel, Shambhala Sun and Buddhadharma, as well as in a variety of scholarly journals. He is on the editorial or advisory boards of the journals Cultural Dynamics, Worldviews, Contemporary Buddhism, Journal of Transpersonal Psychology, and World Fellowship of Buddhists Review. He is also on the advisory boards of Buddhist Global Relief, the Clear View Project, Zen Peacemakers, and the Ernest Becker Foundation. He lives in Boulder, CO.