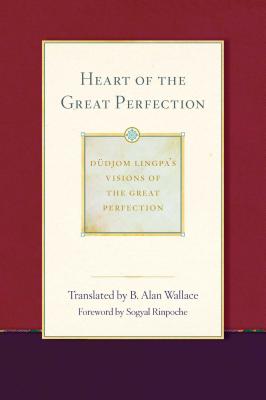 By B. Alan Wallace (Translated by), Dudjom Lingpa


Special Order—Subject to Availability
The revelations of Düdjom Lingpa, a highly influential mystic of 19th century Tibet, translated by B. Alan Wallace, widely respected for his lucid and readable translations of Tibetan Buddhism.

Düdjom Lingpa (1835–1904) was one of the foremost tantric masters of his time. This new series includes his visionary teachings on the Great Perfection (Dzogchen), the pinnacle of practice in Tibet's oldest Buddhist school.

Volume 1 contains four works explaining the view and practice of the Great Perfection, the signature style of meditation of the Nyingma school of Tibetan Buddhism:

The Sharp Vajra of Conscious Awareness Tantra: This work is considered the root distillation of Düdjom Lingpa's wisdom.

Essence of Clear Meaning: This definitive commentary, which unpacks the quintessential verses of The Sharp Vajra, is based on Düdjom Lingpa's oral teachings recorded by his disciple Pema Tashi.

The Foolish Dharma of an Idiot Clothed in Mud and Feathers: Düdjom Lingpa narrates the essential Dharma teachings from the perspective of an old man rejecting superficial appearances.

The Enlightened View of Samantabhadra: A masterful exposition of the Great Perfection is revealed as a dialogue between wisdom beings who bestow a treasury of pith instructions and specific advice for practitioners.

While the teachings in this series have inspired generations of Tibetans, few have been published in translation—until now.
Dynamic lecturer, progressive scholar, and one of the most prolific writers and translators of Tibetan Buddhism in the West, B. Alan Wallace continually seeks innovative ways to integrate Buddhist contemplative practices with Western science to advance the study of the mind. A scholar and practitioner of Buddhism since 1970, Dr. Wallace has taught Buddhist theory and meditation worldwide since 1976. Having devoted fourteen years to training as a Tibetan Buddhist monk, ordained by H. H. the Dalai Lama, he went on to earn an undergraduate degree in physics and the philosophy of science at Amherst College and a doctorate in religious studies at Stanford. He is the founder and president of the Santa Barbara Institute for Consciousness Studies. He is the author of Stilling the Mind and The Attention Revolution. Wallace lives in Santa Barbara, CA.
“Superb...we are indebted to Wallace, and to those who inspired and assisted him, for providing us with such a rich and vital resource for coming to terms with the profundities and puzzles of the Great Perfection.”
— Buddhadharma