Samsara, Nirvana, and Buddha Nature (The Library of Wisdom and Compassion #3) (Paperback) 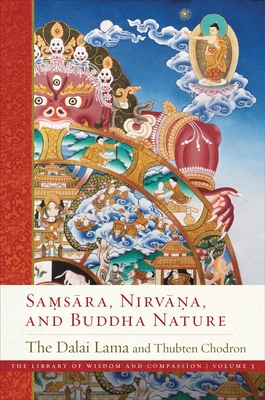 Samsara, Nirvana, and Buddha Nature (The Library of Wisdom and Compassion #3) (Paperback)

By His Holiness the Dalai Lama, Thubten Chodron

This is book number 3 in the The Library of Wisdom and Compassion series.

“The material in this volume is invaluable for those who sincerely wish to understand the Buddhist path and begin to follow it.”
—Venerable Sangye Khadro, author of How to Meditate

The third volume in the Dalai Lama’s definitive and comprehensive series on the stages of the Buddhist path, The Library of Wisdom and Compassion.

Knowledge of buddha nature reveals and reconciles the paradox of how the mind can be the basis for both the duhkha of samsara (the unpurified mind) and the bliss and fulfillment of nirvana (the state of true freedom and peace). To illustrate this, Samsara, Nirvana, and Buddha Nature first takes readers through Buddhist thought on the self, the four truths, and their sixteen attributes. It then explains afflictions—including how they arise and their antidotes—followed by an examination of karma and cyclic existence, and, finally, a deep and thorough elucidation of buddha nature. Samsara, Nirvana, and Buddha Nature shows us how to purify our minds and cultivate awakened qualities.

“This book is a veritable tour de force in its explanation of the role of the mind in samsara and the realization of nirvana, which is the mind’s own ultimate nature. In its examination of buddha nature—spanning early discussions of the mind’s potential in the Pali canon through to the teachings of Dzogchen, the Great Perfection—it casts a bright light to dispel the darkness of materialism, which deludedly reduces the mind to a mere epiphenomenon or emergent property of the brain. Books such as this are urgently needed to trigger a true revolution in the mind sciences.”—B. Alan Wallace, founder and president, Santa Barbara Institute for Consciousness Studies
His Holiness the Dalai Lama is the spiritual leader of the Tibetan people, a Nobel Peace Prize recipient, and a beacon of inspiration for Buddhists and non-Buddhists alike. He has persistently reached out across religious and political lines and has engaged in dialogue with scientists in his mission to advance peace and understanding in the world. In doing so, he embodies his motto, “My religion is kindness.”

Thubten Chodron has been a Buddhist nun since 1977. A graduate of UCLA, she is the founder and abbess of Sravasti Abbey in Washington State. She is a popular speaker and author of numerous books, including Buddhism for Beginners.