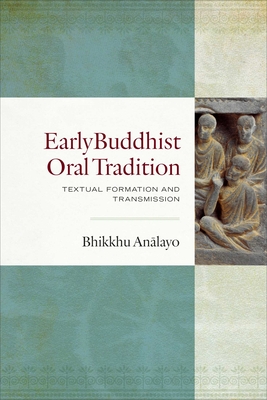 
Not On Our Shelves—Ships in 1-5 Days
A fascinating investigation into the formation and transmission of the early Buddhist oral tradition.

For hundreds of years after his death, the Buddha’s teachings were transmitted orally, from person to person. In this volume, acclaimed scholar-monk Bhikkhu Analayo examines the impact of such oral transmission on early Buddhist texts, be these monastic rules, verses, or prose portions of the early discourses. He scrutinizes various oral aspects of these texts, surveying evidence for memory errors, the impact of attempts at systematization, and instances of additions and innovations. Finally, he explores the implications of the nature of these texts as the final product of centuries of oral transmission and evaluates the type of conclusions that can—and cannot—be drawn based on them.

In-depth but still accessible, Early Buddhist Oral Tradition is an engrossing and enlightening inquiry into the early Buddhist oral tradition.
Bhikkhu Analayo is a scholar of early Buddhism and a meditation teacher. He completed his PhD research on the Satipatthanasutta at the University of Peradeniya, Sri Lanka, in 2000 and his habilitation research with a comparative study of the Majjhima Nikaya in the light of its Chinese, Sanskrit, and Tibetan parallels at the University of Marburg, Germany, in 2007. His over four hundred publications are for the most part based on comparative studies, with a special interest in topics related to meditation and the role of women in Buddhism.