The ABC's of Triangle, Square, Circle: The Bauhaus and Design Theory (Hardcover) 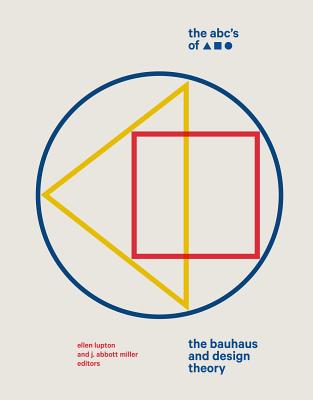 The ABC's of Triangle, Square, Circle: The Bauhaus and Design Theory (Hardcover)


Not On Our Shelves—Ships in 1-5 Days
"… accomplishes what the other books on the Bauhaus don't, which is to demonstrate, in concise language and clear graphics, exactly how Bauhaus design theory works in practice."—The Wall Street Journal

"…an extremely important primer for anyone who knows the legend but not the story of the Bauhaus and its methods."—Steven Heller, The Daily Heller

A new edition of a design classic on the Bauhaus, with a preface by leading designers Ellen Lupton and J. Abbot Miller.

Originally published in 1991, The ABC’s of Triangle, Square, Circle traces the origin and impact of the Bauhaus (the legendary art school in Dessau, Germany, operational from 1919 to 1933, that transformed architecture and design around the world) in relation to design, psychoanalysis, geometry, early childhood education, and popular culture.

The text is a provocative exploration of the school’s aims and achievements, while the book itself is a manifesto of Bauhaus ideals, synthesizing editorial concept, typography, and craftsmanship.

Designed in a manner that honors the aspirations of the Bauhaus, this extraordinary manual is a source of inspiration for design professionals and students and a revelation for all those interested in twentieth-century culture.
Ellen Lupton is the senior curator of contemporary design at Cooper Hewitt, Smithsonian Design Museum and founding director of the Graphic Design MFA program at Maryland Institute College of Art. She is author of Thinking with Type and Graphic Design: The New Basics.

J. Abbott Miller uses design to explore and interpret art, architecture, performance, fashion, and design. As a partner in the New York office of Pentagram, he combines the work of editor, writer, curator, and designer.
"Edited by two renowned graphic designers, The ABC’s of ?¦? lives up to its subject in its own design, which elegantly integrates copious drawings, photographs, and typographic samples."
- CityLab

"This rare beauty is among the early joint works of its illustrious editors. It is also an extremely important primer for anyone who knows the legend but not the story of the Bauhaus and its methods....The Princeton Architectural Press new hardcover version is a standard for any design history class."
- Steven Heller, The Daily Heller

"[T]he most revealing of all the recent books on this subject might be the thinnest ... The book is just 69 pages, but it accomplishes what the other books on the Bauhaus don’t, which is to demonstrate, in concise language and clear graphics, exactly how Bauhaus design theory works in practice."
- The Wall Street Journal

"From graphic design to psychoanalysis, childhood education and beyond, [the Bauhasu's] influence is undeniable. Along with typographical design, diagrams, symbols and various illustrations, [The ABCs of Triangle, Square, Circle: The Bauhaus and Design Theory] is a fascinating lesson in a wildly significant movement."
- Cool Hunting

"[2019] was the 100th anniversary of the establishment of the Bauhaus school of design in Weimar, Germany. Muchmore than an architectural style, the school promoted an educational theory and a strict design language. This is a reissue of a 1991 book, part design history, part playful typographic investigation into the Bauhaus process. This book will appeal to anyone particularly interested in the school’s approach to graphic design, and its enduring influence."
- Financial Times (London)