Dogtown: The Legend of the Z-Boys (Hardcover) 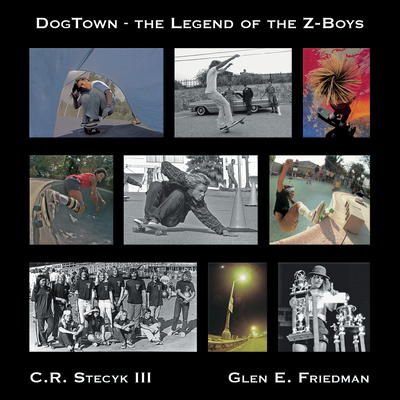 Dogtown: The Legend of the Z-Boys (Hardcover)

"DogTown: The Legend of the Z-Boys is a stunning book that blends historic words and reports with a photo archive that has a golden shelf in the annals of skateboarding."
--SurferToday, One of the Best Skateboard Books of All Time

"Photographer Glen E. Friedman has taken some of the most iconic photos in skateboarding, punk rock and hip hop. Known for capturing the raw energy of a counterculture generation in its prime, his photography helped shape the way people view punk music and redefined the sport of skateboarding."
--q (CBC Radio)

"Veteran skateboard journalist Stecyk and photographer Friedman present a tome of eye-catching images of and articles from Skateboard magazine on the burgeoning Southern California skateboard culture of the 1970s and '80s. Friedman...captures the kinetic energy of the skateboarders as they carve the lips of backyard pools and concrete banks like waves...This insider's look at an influential subculture will appeal most to skateboard enthusiasts."
--Publishers Weekly

"In 2000, Friedman teamed up with journalist C.R. Stecyk III to produce the iconic book, DogTown: The Legend of the Z-Boys, which has just been reissued in a bigger, newly designed edition by Akashic Books. Now spanning 1975-1985 and beyond, the book features DogTown articles written and photographed by C.R. Stecyk III along with hundreds of images from Friedman's archives, many of which appeared in the 2001 documentary film, Dogtown and Z-Boys."
--Feature Shoot

"Glen's reputation was built on documenting the cultures of hip-hop, punk and skateboarding but his photography is far from simple snapshots; it's the work of an artist who possesses the craft to make you experience that singular moment his camera caught each and every time."
--Talk Music Talk (podcast)

"Nearly two decades after the release of the landmark DogTown: The Legend of the Z-Boys, the photographer is back with a revised and expanded edition."
--Huck Magazine

"An expanded edition of a book of Friedman's classic photographs offers an up-close-and-personal look at the birth of modern skateboarding."
--Whalebone

"The photos are great and as a whole it gives the reader a good idea what was going on back in the day in Southern Californian skateboarding."
--Trust (Germany)

In the early 1970s, the sport of skateboarding had so waned from its popularity in the 1960s that it was virtually nonexistent. In the DogTown area of west Los Angeles, a group of young surfers known as the Zephyr Team (Z-Boys) was experimenting with new and radical moves and styles in the water, which they translated to the street. When competition skateboarding returned in 1975, the Z-Boys turned the skating world on its head. DogTown: The Legend of the Z-Boys is a truly fascinating case study of how an underground sport ascended in the world. These are the stories and images of a time that not only inspired a generation but changed the face of the sport forever.

This volume has been described as "the DogTown textbook" and an indispensable companion piece to the Sony Pictures Classics film Dogtown and Z-Boys. Now spanning 1975-1985 and beyond, the first section of the book includes the best of the DogTown articles written and photographed by C.R. Stecyk III as they originally appeared in SkateBoarder Magazine. The second half compiles hundreds of skate images from the archives of Glen E. Friedman--many of which appear in the movie. (Stecyk and Friedman acted as executive producers and advisors for the film.)

Glen E. Friedman, one of the most important photographers of his generation, is known for his influential and iconic images of rebellious artists from classic skateboarding, punk, and hip-hop cultures. As a true artist his process was much more incendiary than it was documentary. Friedman, first published at the age of fourteen, has produced over 100 record covers, countless magazine pages, and almost a dozen books, including DogTown: The Legend of the Z-Boys. His work is now included in a number of notable international collections, including the Metropolitan Museum of Art and the Smithsonian Institution.C.R. Stecyk III is the DogTown godfather. He is a seminal figure in the skateboarding and surfing worlds as a writer, photographer, museum-collected artist, and one of street culture's chief architects. He is cofounder of Juxtapoz magazine, and one of the earliest iconic inductees into the Skateboarding Hall of Fame. Stecyk is a Southern California native.