You Throw Like a Girl: The Blind Spot of Masculinity (Paperback) 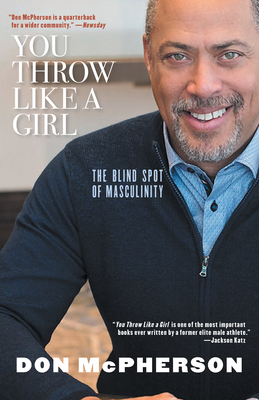 You Throw Like a Girl: The Blind Spot of Masculinity (Paperback)

Former NFL quarterback McPherson examines the roots of masculinity gone awry and how it promotes violence against women.

"An essential exploration of what's holding men and sports back--and how to overcome it."
--Washington Post

"A crucial read for anyone interested in learning more about how sports culture informs limited definitions of masculinity, and how such definitions are destructive for boys and men, and dangerous to girls and women. Don McPherson, a former NFL and college quarterback, urges readers to think critically about the unfair expectations society sets based on gender, and how to upend them."
--The Undefeated, one of The Undefeated's Can't Miss Books of 2019

"You Throw Like a Girl: The Blind Spot of Masculinity by former NFL quarterback Don McPherson is an examination of society's traditional definition of masculinity and how this narrow focus creates blind spots that hinder the healthy development of men. Using examples from his own life, McPherson dissects the strict beliefs and unspoken rules that define our views of manhood, the behaviors of masculinity we instill in growing boys, and how the resulting lack of emotional wholeness can lead to violence against women. He passionately advocates against the dangers of viewing such violence as strictly a 'women's issue.' Instead, he argues that the toxicity of the traditional views of masculinity are ultimately culpable."
--The Advocate

"McPherson does not malign masculinity. Moreover, he does not seed guilt and shame unto boys. Thankfully, there is no blind hagiography of women and wanton vilification of men. Masculinity is natural, healthy, and undeniable...Soundly and clearly articulated, McPherson has emerged as a measured voice in an oftentimes kinetic and unsettling narrative...Highly recommended."
--Jamaica Gleaner

"The Central New York community knows Don McPherson as the Hall-Of-Fame quarterback who led the 1987 SU football team to an undefeated season. But for the past 27 years, he's also been working on publishing a book that tackles the tough issue of how boys are traditionally raised with macho stereotypes that impacts sexual and domestic violence."
--Bridge Street (WYSR 9, Syracuse, NY)

"Former SU Quarterback Don McPherson isn't fighting for yards or touchdowns, he's in the fight to reduce violence against women. He just published a book, You Throw Like a Girl: The Blind Spot of Masculinity."
--WAER (Syracuse University 88.3 FM, Syracuse, NY)

" McPherson] is also out with a new book entitled You Throw Like a Girl: The Blind Spot of Masculinity. In it, McPherson examines his own life experiences and how they impacted his perception of what it was to be a man."
--CNY Central (NBC3 Syracuse, NY)

In You Throw Like a Girl, former Syracuse University quarterback and NFL veteran Don McPherson examines how the narrow definition of masculinity adversely impacts women and creates many "blind spots" that hinder the healthy development of men. Dissecting the strict set of beliefs and behaviors that underpin our understanding of masculinity, he contends that we don't raise boys to be men, we raise them not to be women.

Using examples from his own life, including his storied football career, McPherson passionately argues that viewing violence against women as a "women's issue" not just ignores men's culpability but conflates the toxicity of men's violence with being male. In You Throw Like a Girl, McPherson leads us beyond the blind spots and toward solutions, analyzing how we can engage men in a sustained dialogue, with a new set of terms that are aspirational and more accurately representative of the emotional wholeness of men.

Don McPherson--an All-America quarterback at Syracuse University who went on to play professionally in the NFL and Canada--began his work on gender-based violence prevention in 1994 at Northeastern University's Center for the Study of Sport in Society. He has served on the boards of the Ms. Foundation for Women, the NCAA Sexual Assault Task Force, and the NCAA Board of Governors Commission to Combat Campus Sexual Violence. His educational programs and lectures have reached over one million people in more than three hundred colleges and communities throughout North America.