LSD and the Divine Scientist: The Final Thoughts and Reflections of Albert Hofmann (Paperback) 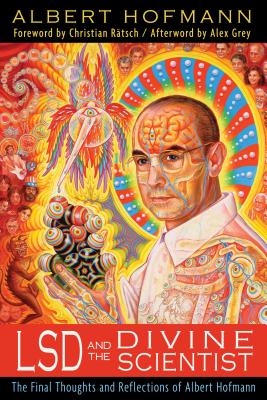 LSD and the Divine Scientist: The Final Thoughts and Reflections of Albert Hofmann (Paperback)


Not On Our Shelves—Ships in 1-5 Days
The acclaimed discoverer of LSD’s personal experiences and thoughts on chemistry, the natural sciences, mind-altering drugs, the soul, and the search for happiness

• Shares a different side of the father of LSD, one known only to his friends and close colleagues

• Includes the poetry of this mystical prophet of psychedelic science

Best known as the first person to synthesize, ingest, and discover the psychedelic effects of LSD, Albert Hofmann was more than just a chemist. A pioneer in the field of visionary plant research, he was one of the first people to suggest the use of entheogens for psychological healing and spiritual growth. His insights into the consciousness-expanding effects of psychedelics as well as human nature, the psyche, and the nature of reality earned him a reputation as a mystical scientist and visionary philosopher.

This book--Hofmann’s last work before his death in 2008 at the age of 102--offers the acclaimed scientist’s personal experiences and thoughts on chemistry, the natural sciences, mind-altering drugs, the soul, and the search for happiness and meaning in life. Hofmann explains different methods of pharmaceutical research based on traditional plant medicine and discusses psilocybin, the active compound in psychedelic mushrooms that he discovered. He examines the psychological role of psychoactives, their therapeutic potential, and their use in easing the life-to-death transition. Sharing a different side of the father of LSD, one known only to his friends and close colleagues, this book also includes the poetry of this mystical prophet of psychedelic science.
Albert Hofmann (1906-2008), the father of LSD, was a world-renowned scientist, member of the Nobel Prize Committee, Fellow of the World Academy of Sciences, and member of the International Society of Plant Research and of the American Society of Pharmacognosy. He was a leader in pharmaceutical-chemical research and the author of several books, including LSD: My Problem Child.

Christian Rätsch, Ph.D. (1957 – 2022), was a world-renowned anthropologist and ethnopharmacologist who specialized in the shamanic uses of plants for spiritual as well as medicinal purposes. He studied Mesoamerican languages and cultures and anthropology at the University of Hamburg and spent, altogether, three years of fieldwork among the Lacandone Indians in Chiapas, Mexico, being the only European fluent in their language. He then received a fellowship from the German academic service for foreign research, the Deutsche Akademische Auslandsdienst (DAAD), to realize his doctoral thesis on healing spells and incantations of the Lacandone-Maya at the University of Hamburg, Germany.

In addition to his work in Mexico, his numerous fieldworks have included research in Thailand, Bali, the Seychelles, as well as a long-term study (18 years) on shamanism in Nepal combined with expeditions to Korea and the Peruvian and Colombian Amazon. He also was a scientific anthropological advisor for expeditions organized by German magazines such as GEO and Spektrum der Wissenschaften (Spectrum of Sciences).

Before becoming a full-time author and internationally renowned lecturer, Rätsch worked as professor of anthropology at the University of Bremen and served as consultant advisor for many German museums. Because of his extensive collection of shells, fossils, artifacts, and entheopharmacological items, he had numerous museum expositions on these topics.

He is the author of numerous articles and more than 40 books, including Plants of Love, Gateway to Inner Space, Marijuana Medicine, The Dictionary of Sacred and Magical Plants, and The Encyclopedia of Psychoactive Plants. He is also coauthor of Plants of the Gods, Shamanism and Tantra in the Himalayas, Witchcraft Medicine, Pagan Christmas, and The Encyclopedia of Aphrodisiacs and was editor of the Yearbook of Ethnomedicine and the Study of Consciousness. A former member of the board of advisors of the European College for the Study of Consciousness (ECSC) and former president of the Association of Ethnomedicine, he lived in Hamburg, Germany.

Alex Grey is the author of Sacred Mirrors and The Mission of Art. His work has graced the album covers of Nirvana and the Beastie Boys, has appeared in Newsweek, and has been exhibited around the world, including the New Museum and Stux Gallery in New York City, the Grand Palais in Paris, and the ARK exhibition space in Tokyo. In 1999 the Museum of Contemporary Art in San Diego honored Grey with a mid-career retrospective. He lives in New York with his wife, artist Allyson Grey, and their daughter, actress Zena Grey. In 2019, Alex Grey was cited as one of the "100 Most Spiritually Influential Living People in the World" according to Watkins Mind Body Spirit magazine.
“This book is a jewel box of the many facets of Hofmann’s mind: as a pure scientist and still in love with the discipline, as a science mystic making a clear-eyed case for the need for the two to blend, as a nature mystic drawing out the implications envisioned and verified in altered states, and as a philosopher of science grappling with the hard questions of death and the fabric of reality itself. Each essay was a rare mix--profound and readable. The essay by Alex Grey about the symbolism in his cover portrait of Hofmann is the perfect conclusion.”
— James Fadiman, author of The Psychedelic Explorer’s Guide

“Albert Hofmann’s creation of LSD and identification of psilocybin had and continues to have a deep and lasting impact on psychiatry, and even more so on Western culture and spirituality. This invaluable collection reveals how, in his personal life, Albert leaned more toward spirituality than psychotherapy. In LSD and the Divine Scientist, Albert Hofmann reveals through his life and his work that we can be involved in spiritual practices while embracing the rigor of scientific methodology and a healthy, productive lifestyle. This inspiring book reveals how fortunate the world is that Albert was the father of LSD and, in profound ways, the spiritual father of millions of responsible psychedelic users.”
— Rick Doblin, president and founder of the Multidisciplinary Association for Psychedelic Studies (MAP

“In this collection, Albert Hofmann shares his scientific, philosophical, psychological, and religious insights in an especially candid and engaging manner. His warmth, candor, and strength of character shine in them all, and through them we gain a satisfying glimpse into a great scientist’s life.”
— Rick Strassman, M.D., author of DMT: The Spirit Molecule and coauthor of Inner Paths to Outer Space

“An extraordinary quality of Albert Hofmann was his ability to integrate the spiritual and the material under the conceptual umbrella of the natural. As his last work, LSD and the Divine Scientist presents Hofmann’s most mature thought, the flowering of the scientist as philosopher in a natural integration of science and philosophy. May these final essays be the key to achieving Hofmann’s ultimate vision.”
— Neal Goldsmith, author of Psychedelic Healing