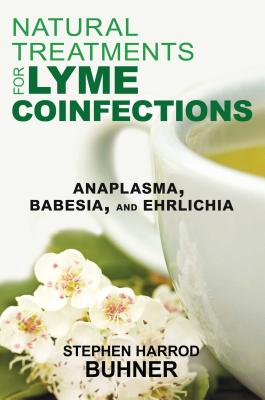 • Reviews the latest scientific research on Babesia, Ehrlichia, and Anaplasma

• Reveals how these three conditions often go undiagnosed, complicate the treatment of Lyme disease, and cause symptoms from headache to seizures

Harvard researchers estimate there are nearly 250,000 new Lyme disease infections each year--only 10 percent of which will be accurately diagnosed. One of the largest factors in misdiagnosis of Lyme is the presence of other tick-borne infections, which mask or aggravate the symptoms of Lyme disease as well as complicate treatment. Three newly emergent Lyme coinfections are Babesia, Ehrlichia, and Anaplasma. Tens of thousands of people are known to be asymptomatically infected and at least ten percent will become symptomatic this year--with symptoms ranging from chronic headache and arthritis to seizures.

Distilling the latest scientific research on Babesia, Ehrlichia, Anaplasma, and Lyme disease, Stephen Buhner examines the complex synergy between these infections and reveals how they can go undiagnosed or resurface after antibiotic treatment. He explains how these organisms create cytokine cascades in the body--essentially sending the immune system into an overblown, uncontrolled inflammatory response in much the same way rheumatoid arthritis or cancer can.

Providing an in-depth guide for those suffering from Babesia, Ehrlichia, or Anaplasma infection as well as for clinicians who work with those infected by these organisms, Buhner details effective natural holistic methods centered on herbs and supplements, such as Ashwaganda and Chinese Skullcap, and reveals how to treat specific symptoms, interrupt the cytokine cascades, reduce inflammation, and bring the immune system back into balance. He explains how these natural methods not only complement conventional Lyme disease treatments involving antibiotics and other pharmaceuticals but also provide relief when other forms of treatment have failed.
Stephen Harrod Buhner is an Earth poet and the award-winning author of ten books on nature, indigenous cultures, the environment, and herbal medicine. He comes from a long line of healers including Leroy Burney, Surgeon General of the United States under Eisenhower and Kennedy, and Elizabeth Lusterheide, a midwife and herbalist who worked in rural Indiana in the early nineteenth century. The greatest influence on his work, however, has been his great-grandfather C.G. Harrod who primarily used botanical medicines, also in rural Indiana, when he began his work as a physician in 1911.

Stephen's work has appeared or been profiled in publications throughout North America and Europe including Common Boundary, Apotheosis, Shaman's Drum, The New York Times, CNN, and Good Morning America. www.gaianstudies.org
“Stephen Harrod Buhner’s new book, Natural Treatments for Lyme Coinfections, is a brilliant follow up of his previous groundbreaking books Healing Lyme and Healing Lyme Disease Coinfections. This is a must read for medical practitioners and patients, providing a deep understanding of how these microorganisms have evolved and relate to their intricate ecosystems. Stephen insists that it is not possible to successfully treat these evolving microbes without a full grasp of this information. For example, knowing that Babesia requires red blood cells, endothelial cells, and spleen tissues to reproduce and understanding the biochemistry of how this happens allows him to provide a clear roadmap of how to approach treatment properly. This roadmap has not been available until now. Thank you, Stephen!”
— Neil Nathan, M.D., board certified family physician and author of Healing Is Possible

“Stephen Harrod Buhner is performing important work in disseminating this information to patients and their clinicians. Many with chronic Lyme suffer from undiagnosed coinfections and would benefit from the entourage effects and herbal synergies of medicinal plants. Relief is available in the natural world, a true alternative treatment, beyond the reach of the medical bureaucracy.”
— Julie Holland, M.D., author of Weekend at Bellevue

“In this newest volume of Stephen Buhner’s exploration of Lyme and its coinfections, he again excels in presenting an enormous amount of detailed information in a thorough and accessible manner, offering what readers need most in such a tome: the knowledge to make their own informed decisions in addressing these issues.”
— Jim McDonald, Herbalist