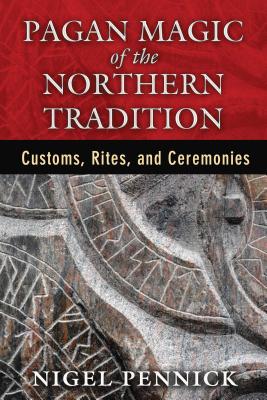 
Not On Our Shelves—Ships in 1-5 Days
A practical guide to the magical history, customs, and practices of pre-Christian Northern Europe

• Details the everyday magic of the Northern Tradition, including household magic, protection spells, and the significance of the days of the week

• Explores direct natural magic, such as shapeshifting and soul travel, and talismanic or sigil magic, including runes and rituals to unlock the power of crafted objects

• Explains how many of these customs continue to the present day

In the pre-Christian societies of Northern Europe, magic was embedded in the practical skills of everyday life. Everything in Nature was ensouled with an inner spirit, as was anything made by hand. People believed in magic because it worked and because it was part of the functionality of their day-to-day lives. Many of these practical observances and customs continue to the present day as rural traditions, folk customs, household magic, and celebrations of the high and holy days of the calendar.

Exploring the magical pagan traditions of the people now called Celtic, Germanic, Scandinavian, Slavonic, and Baltic, Nigel Pennick examines the underlying principle of the Northern Tradition--the concept of Wyrd--and how it empowers the arts of operative magic, such as direct natural magic and talismanic or sigil magic. Through direct natural magic, individuals can shape shift, journey out of the body, or send one of their three souls (fylgia or “fetch”) ahead of them. Sigil magic involves the powers contained in objects, which can be channeled after the appropriate ritual. Runes are the most powerful sigils in the Northern Tradition and were used to ward off illness, danger, hostile magic, and malevolent spirits. Emphasizing the importance of the cycles of Nature to the tradition, Pennick explores the eightfold sun dials and the four ways the solar year is defined. He looks at the days of the week and their symbolic association with different deities as well as why particular acts are performed on certain days and what the customary lucky and unlucky days are. He also examines sacred spaces, household magic, protection spells, and the role of music in the Northern Tradition.

Explaining all the traditional holidays and activities necessary to honor them, Pennick shows how anyone can participate authentically in the magic of the Northern Tradition if they take care to do things properly, with respect, and on the right day.
Nigel Pennick is an authority on ancient belief systems, traditions, runes, and geomancy and has traveled and lectured extensively in Europe and the United States. He is the author and illustrator of more than 50 books, including The Pagan Book of Days. The founder of the Institute of Geomantic Research and the Library of the European Tradition, he lives near Cambridge, England.
“Nigel Pennick’s Pagan Magic of the Northern Tradition is a treasure trove of ancient folklore of magical rituals and charms for the protection of people and homes, of barns and livestock, of temples and churches, for good luck and healing as well as causing harm when the rituals are not followed. It describes daily ritual activities of the people of these Pagan times and how they experienced the dangers and evil spirits of the world they lived in. Some of the magical rituals were quite bizarre while others may be of value for living in today’s world. Pennick compares the customs and rituals of a wide range of cultures across Europe and beyond, as well as across time, tracing their origins, similarities, and differences. The book is well researched, well organized, and a valuable and impressive resource for understanding the spiritual journeying of our ancestors.”
— Nicholas E. Brink, Ph.D., author of Baldr’s Magic:The Power of Norse Shamanism and Ecstatic Tr

“Whether we call it magic or folklore (or even superstition), the traditional, often pre-Christian knowledge described in Pagan Magic of the Northern Tradition is fascinating. I’ve been referring to Pennick’s books for years when I need a fact or an example of some interesting early magic to cite in my books and blogs. I learned something new on every page!”
— Barbara Ardinger, Ph.D., author of Pagan Every Day and Secret Lives

“Magic was a part of everyday life for our Pagan ancestors, a spiritual approach to the environment used by everyone and embedded in all the practical skills of living, from farming and building to music and healing. Nigel Pennick shows us that it is a tradition that still flourishes and rewards us in the modern world.”
— Anna Franklin, author of The Sacred Circle Tarot, Pagan Ritual, and Hearth Witch

“Nigel Pennick’s book offers a well-documented overview of everyday magic, the last recourse against all evils. It introduces us to a strange Pagan world haunted by spirits and supernatural owners of nature and rehabilitates the studies of magic as an important part of our common cultural heritage. Pennick’s book is well worth a read!”
— Claude Lecouteux, professor emeritus at the Sorbonne and author of The Tradition of Household Spirit