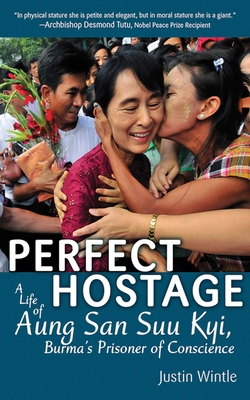 
Special Order—Subject to Availability
Burma is a country where, as one senior UN official puts it, “just to turn your head can mean imprisonment or death.”

Aung San Suu Kyi is one of the world’s foremost inspirational revolutionary leaders. Considered to be Burma’s best hope for freedom, she has waged a war of steadfast nonviolent opposition to the country’s vicious militant regime. Because of her resistance to the brutality of the Burmese government, she has been under house arrest since 1989.

She has endured failing health, vilification through the Burmese media, and cruel imprisonment in one of the world’s most dreadful and inhumane jails. Suu Kyi has fought every hardship the junta could put her through, yet she has never once wavered from her position, never once advocated violence, and persevered in her message of peaceful resistance at all costs, earning her the Nobel Peace Prize in 1991, placing her among the likes of such renowned champions of peace as Gandhi, King, and Mandela. She is a truly heroic revolutionary.

In Perfect Hostage, the most thorough biography of Suu Kyi to date, Justin Wintle tells both the story of the Burmese people and the story of an ordinary person who became a hero.
Justin Wintle has a degree in modern history from Oxford. He is the author of Romancing Vietnam, The Vietnam Wars, Furious Interiors, and the Rough Guide histories of China, Islam, and Spain. He is a contributor to the Financial Times, the Sunday Times, and the Independent. He resides in the United Kingdom.