The Withdrawal: Iraq, Libya, Afghanistan, and the Fragility of U.S. Power (Hardcover) 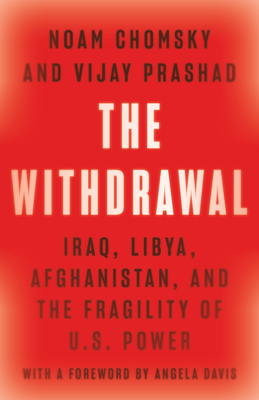 The Withdrawal: Iraq, Libya, Afghanistan, and the Fragility of U.S. Power (Hardcover)

"Through the structure of a deeply engaging conversation between two of our most important contemporary public intellectuals, we are urged to defy the inattention of the media to the disastrous damage inflicted in Afghanistan on life, land, and resources in the aftermath of the U.S. withdrawal and the connections to the equally avoidable and unnecessary wars on Iraq and Libya."--from the foreword by Angela Y. Davis

Not since the last American troops left Vietnam have we faced such a sudden vacuum in our foreign policy--not only of authority, but also of explanations of what happened, and what the future holds.

Few analysts are better poised to address this moment than Noam Chomsky and Vijay Prashad, intellectuals and critics whose work spans generations and continents. Called "the most widely read voice on foreign policy on the planet" by the New York Times Book Review, Noam Chomsky is the guiding light of dissidents around the world. In The Withdrawal, Chomsky joins with noted scholar Vijay Prashad--who "helps to uncover the shining worlds hidden under official history and dominant media" (Eduardo Galeano)--to get at the roots of this unprecedented time of peril and change.

Chomsky and Prashad interrogate key inflection points in America's downward spiral: from the disastrous Iraq War to the failed Libyan intervention to the descent into chaos in Afghanistan.

As the final moments of American power in Afghanistan fade from view, this crucial book argues that we must not take our eyes off the wreckage--and that we need, above all, an unsentimental view of the new world we must build together.

Noam Chomsky is Institute Professor (emeritus) in the Department of Linguistics and Philosophy at the Massachusetts Institute of Technology and Laureate Professor of Linguistics and Agnese Nelms Haury Chair in the Program in Environment and Social Justice at the University of Arizona. A world-renowned linguist and political activist, he is the author of numerous books, including On Language, Understanding Power (edited by Peter R. Mitchell and John Schoeffel), American Power and the New Mandarins, For Reasons of State, Problems of Knowledge and Freedom, Objectivity and Liberal Scholarship, Towards a New Cold War, The Essential Chomsky (edited by Anthony Arnove), On Anarchism, The Chomsky-Foucault Debate (with Michel Foucault), and The Withdrawal: Iraq, Libya, Afghanistan, and the Fragility of U.S. Power (with Vijay Prashad), all published by The New Press. He lives in Tucson, Arizona. Vijay Prashad is director of Tricontinental: Institute for Social Research, editor of LeftWord Books, and the chief correspondent for Globetrotter. He is the author of The Darker Nations: A People's History of the Third World, Uncle Swami: South Asians in America Today, and co-author (with Noam Chomsky) of The Withdrawal (all published by The New Press), as well as Washington Bullets. The Darker Nations was chosen as a Best Nonfiction Book of the Year by the Asian American Writers' Workshop and won the Muzaffar Ahmad Book Prize. He lives in Santiago, Chile.