The Power of Silence: Against the Dictatorship of Noise (Paperback) 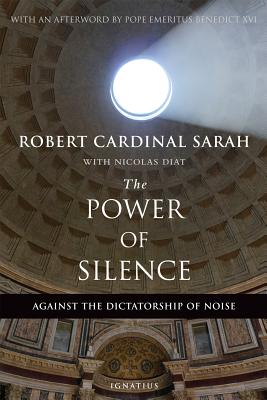 The Power of Silence: Against the Dictatorship of Noise (Paperback)

Now with a new afterword by Pope emeritus Benedict XVI!

In a time when there is more and more noise, and technology and materialism continue to exert their hold on us, Cardinal Robert Sarah presents a bold book about the strength of silence. The world generates so much noise that seeking moments of silence only becomes more necessary. For Cardinal Sarah, modern man, in repressing the divine, finds himself in a deep dilemma, an oppressive and anguishing trial. The Cardinal recalls that life is a silent relationship between what is most intimate in man and God. Silence is indispensable for hearing the music of God: prayer arises from silence and returns to silence with ever greater depth.

In this long and profound conversation with Nicolas Diat, done within the hallowed walls of silence in the famous Carthusian monastery of La Grande Chartreux in France, the Cardinal proposes the question: can those who do not know silence ever attain truth, beauty, love? The response is undeniable: all that is great and creative is formed by silence. God is silence.

After the great international success of God or Nothing, translated into fourteen languages, Cardinal Sarah seeks to restore to silence its place of honor and importance. "Although speech characterizes man, silence is what defines him, because speech acquires sense only in terms of this silence." This is the beautiful and significant message of The Power of Silence.

In this book, Cardinal Sarah has only one aim, which is summed up in this thought from his book: "Silence is difficult but it makes a human being able to allow himself to be led by God. Silence is born of silence. Through God the silent one we can gain access to silence. And a human being is unceasingly surprised by the light that bursts forth then. Silence is more important than any other human work. For it expresses God. The true revolution comes from silence; it leads us toward God and others so as to place ourselves humbly and generously at their service."

Robert Cardinal Sarah was born in Guinea, West Africa. Made an Archbishop by Pope John Paul II and a Cardinal by Pope Benedict XVI, he was named the Prefect of the Congregation for Divine Worship and the Discipline of the Sacraments by Pope Francis in 2014.

Nicolas Diat is a French journalist and author. His previous collaboration with Cardinal Sarah was on his book, God or Nothing.