Inside the Orphan Drug Revolution: The Promise of Patient-Centered Biotechnology (Hardcover) 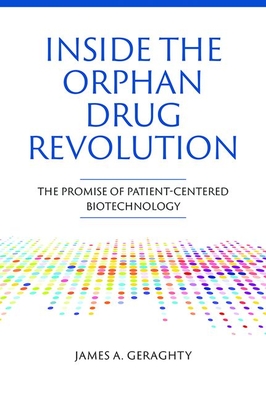 Inside the Orphan Drug Revolution: The Promise of Patient-Centered Biotechnology (Hardcover)

By James A. Geraghty


Not On Our Shelves—Ships in 1-5 Days
Advances in medicine have made possible better treatments for widespread, familiar human illnesses like cancer, diabetes, and heart disease. Yet there are thousands of much less common diseases, most of genetic origin, each classed as rare because it afflicts only a small number of people. These patient groups were long ignored by a pharmaceutical industry that judged them too small to provide a return on the investment needed to develop an effective remedy. Yet these orphaned diseases collectively caused misery and expense, often far greater than did more common ailments, for tens of millions of individuals and their families. Forty years ago, a revolution that transformed the prospects of patients with rare diseases was lit by three sparks. The passage of the 1983 U.S. Orphan Drug Act resulted from public pressure brought by rare disease patients, their families, and advocates. The AIDS epidemic triggered additional activism, compounded when patients with the rare disease hemophilia became HIV-positive after infusion of tainted blood products. And the third spark was the emergence in the early 1980s of biotechnology companies like Genentech, Amgen, and Biogen employing then-new genetic engineering instead of conventional approaches to pharmaceutical development. Soon after, Genzyme became the first company to develop a treatment for a rare genetic disorder, Gaucher disease, which would come to transform the industry. Jim Geraghty has been a passionate participant in the orphan drug revolution since its inception--a leader in the field as a strategy consultant, biotechnology executive, and venture entrepreneur. His book is in part a history, with eyewitness accounts of advances as they occurred and portraits of the pioneering scientists and physicians, tireless activists, and visionary business leaders who made the revolution happen. And it tells deeply personal stories of patients and parents willing to risk new, untried therapies. But Geraghty also uses his exceptional experience and vantage point to look forward to the immense promise of the newest technologies like gene therapy and gene editing for the treatment of patients today and tomorrow. He concludes with thoughtful consideration of important questions. Why do drugs to treat orphan diseases cost so much? How can we ensure they are affordable? How can their effectiveness be responsibly assessed? And how can access to them be expanded
internationally? This book graphically and poignantly illustrates how far an important healthcare revolution has come and reminds us that if not nurtured, it could end before its immense promise has been fulfilled.

A widely recognized leader in the rare disease field, Jim Geraghty has been a director or chair of seven NASDAQ-listed biotech companies. He's worked on orphan drugs for more than 40 years--as a strategy consultant, a CEO, a leader of pioneering international operations at Genzyme, and a venture entrepreneur. A former trustee of Harvard Medical School's renowned Joslin Diabetes Center, he's spoken before both houses of Congress, at the World Economic Forum, and at many other high-profile conferences. A Georgetown graduate with a masters in psychology from Penn and a law degree from Yale, he is a citizen of three countries and lives in Boston.