Conscious Business: How to Build Value through Values (Paperback) 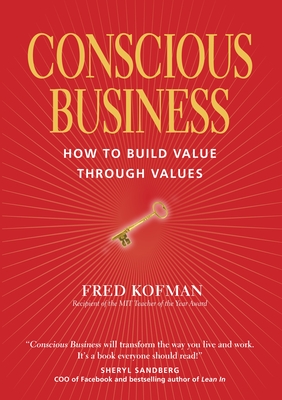 Conscious Business: How to Build Value through Values (Paperback)

Consciousness is the main source of organizational greatness. Conscious business, explains Fred Kofman, means finding your passion and expressing your essential values through your work. A conscious business seeks to promote the intelligent pursuit of happiness in all its stakeholders. It produces sustainable, exceptional performance through the solidarity of its community and the dignity of each member.

Unconditional responsibility—how to become the main character of your life
• Unflinching integrity—how to succeed beyond success
• Authentic communication—how to speak your truth, and elicit others' truths
• Impeccable commitments—how to coordinate actions with accountability
• Right leadership—how being, rather than doing, is the ultimate source of excellence
A conscious business fosters personal fulfillment in the individuals, mutual respect in the community, and success in the organization, teaches Fred Kofman. Conscious Business is the definitive resource for achieving what really matters in the workplace and beyond.


Winner of the 2009 Nautilus Award

Fred Kofman, PhD, is Google’s leadership development advisor, a director of the Conscious Leadership Center at the Monterrey Institute of Technology, and a founder and president of the Conscious Business Center International.

After earning a PhD in economics from University of California at Berkeley, Fred was a prominent professor at MIT’s Sloan School of Management. There he also worked alongside Peter Senge, the author of The Fifth Discipline, as a senior researcher at the Center for Organizational Learning.

Later, Fred founded his global consulting company, Axialent, which has delivered leadership programs to more than 15,000 executives around the world.

In 2013, Fred took a position of the Vice President of Executive Development at LinkedIn. During this time, Fred and LinkedIn offered a Conscious Business Academy program to professionals around the world.

Fred is the author of the trilogy Metamanagement (Granica, 2001), Conscious Business (SoundsTrue, 2006), and The Meaning Revolution: The Power of Transcendent Leadership (Currency, 2018).

Sheryl Sandberg, COO of Facebook, writes about Fred in her book Lean In, claiming he "will transform the way you live and work."

To learn more about Fred and his work:

Ken Wilber is the author of over a dozen books, including No Boundary, A Brief History of Everything, and his landmark first title, The Spectrum of Consciousness. He had been acclaimed for synthesizing the teachings of religion, psychology, physics, mysticism, and anthropology. He lives in Boulder, Colorado, where he writes and meditates.


Ken Wilber is one of the most influential and widely read American philosophers of our time. His writing has been translated into more than 20 languages. Ken Wilber is the author of many books, including The Spectrum of Consciousness; The Eye of Spirit; Grace and Grit; Sex, Ecology, Spirituality; A Brief History of Everything; Boomeritis; and The Marriage of Sense and Soul. Ken Wilber lives in Denver, Colorado.

Peter Senge, Ph.D. is a senior lecturer at MIT Sloan School of Management; founding chairperson of the SoL (Society of Organizational Living), a global network of individuals and organizations working together for systemic change; the author of the widely acclaimed The Fifth Discipline; and co-author of Presence: Human Purpose and the Field of the Future. He teaches the principles of conscious learning to organizations and individuals internationally.