American Christianity's Adultery with Secular Culture: The Truth about Our Dangerous Compromise with the World (Paperback) 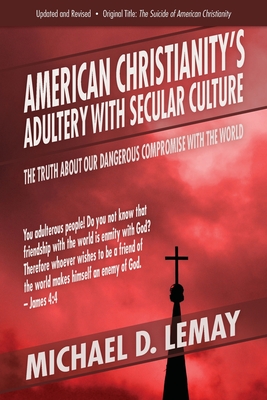 American Christianity's Adultery with Secular Culture: The Truth about Our Dangerous Compromise with the World (Paperback)

An honest look at where the church in America is headed and what we can do to change course.

American Christianity is dying a slow death at its own hands. Instead of positively affecting the secular culture, we are being infected by it under the guise of being "seeker-friendly" and "loving." Soon, the church may be an exact mirror of the culture that seeks to destroy us. With a lack of strong, principled leaders, and with followers who want their ears tickled instead of being challenged to pursue righteousness, American Christianity is writing its own epitaph as it slowly dies.

Unless we reverse course by embracing the complete, absolute truth of God's Word and stop trying to redefine God in our selfish human image, only a remnant will remain of a once-powerful church. Do we have the courage to challenge ourselves and our leaders to reject secular culture and its influences? Or will we continue to die a slow death at our own hands as we continue to inhale the cancer of secular humanism? Time is running out.

Mike LeMay is an author, biblical apologist, radio talk show host, and general manager of Q90 FM, a Christian radio station in Green Bay, Wisconsin. He has extensively studied and reported on news, issues, and trends pertaining to the Christian life, pointing people to the truth of God's Word.

His books have received critical acclaim for their insight in bringing news and topics of the day into correct biblical context and understanding, helping Christians see the big picture of what is happening around them. His latest book, American Christianity's Slide into Apostasy: What We Must Do before It's Too Late, points out the growing disparity between Biblical Christianity and an "American Christianity" that is integrating secular beliefs, thoughts, and processes into the church, leading people further away from God and His eternal truth.

Mike is also owner of Christian Thought Consulting, LLC, and he helps families and business professionals find peace, joy, and purpose in their increasingly busy lives.