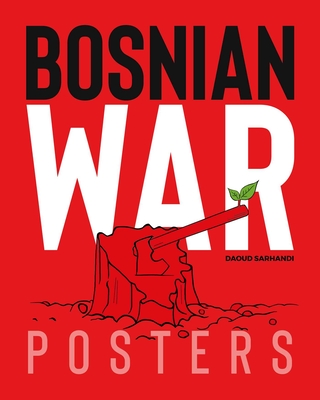 
Not On Our Shelves—Ships in 1-5 Days
Bosnian War Posters is a unique compilation of posters and political graphic design. It includes key archive photos from the war as well as new photos that put all the images in context today.

This book illustrates the entire conflict: from April 1992—when the first shots were fired in Sarajevo—to December 1995—when peace was agreed upon in Dayton, Ohio. Subsequent images depict the post-war reconstruction period and the hunt for war criminals. The posters were gathered together in Bosnia and the former Yugoslavia shortly after the Bosnian war ended. They form the only large, pan-Bosnian collection of such material that exists, offering an eye-witness account of the war from the point of view of those who lived through all its horrors.

A unique pictorial study of the bloodiest European conflict since 1945, Bosnian War Posters will engage all those interested in graphic design, poster art, the tragic story of Yugoslavia, and the politics of nationalism in the modern age.
Daoud Sarhandi is an award-winning filmmaker and a writer from the UK.

Carol A. Wells is the director of the Los Angeles-based Center for the Study of Political Graphics.

Vehid Šehić is head of the Forum of Tuzla Citizens, Tuzla, Bosnia-Herzegovina.
“Handsomely presented and rigorously detailed, this is a captivating look at the art of propaganda … Filmmaker Sarhandi delivers an unusual history of the Bosnian War (1992–1995) focused on propaganda posters created and distributed by various players in the conflict … [He] lucidly explains the Balkans’ complex political, religious, and ethnic divisions; and sketches how the rise of nationalist parties in Serbia and Croatia contributed to the conflict. But the book shines in its presentation and analysis of the posters themselves … Detailed captions explain the meaning and background of each artwork, shedding light on the origins of anti-Muslim sentiment in Croatia, the horrors of the siege of Sarajevo, and Serbian nationalists’ use of Vietnam War imagery to warn the U.S. to stay out of the conflict.”
— Publishers Weekly