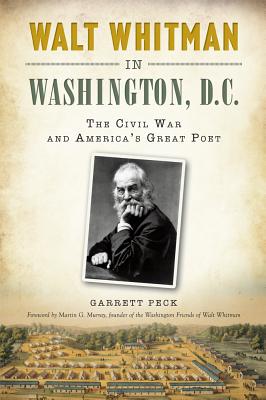 
On Our Shelves Now at:
Walt Whitman was already famous for Leaves of Grass when he journeyed to the nation's capital at the height of the Civil War to find his brother George, a Union officer wounded at the Battle of Fredericksburg. Whitman eventually served as a volunteer hospital missionary, making more than six hundred hospital visits and serving over eighty thousand sick and wounded soldiers in the next three years. With the 1865 publication of Drum-Taps, Whitman became poet laureate of the Civil War, aligning his legacy with that of Abraham Lincoln. He remained in Washington until 1873 as a federal clerk, engaging in a dazzling literary circle and fostering his longest romantic relationship, with Peter Doyle. Author Garrett Peck details the definitive account of Walt Whitman's decade in the nation's capital.