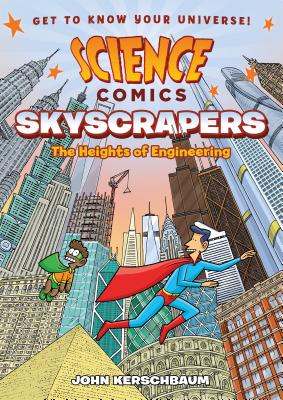 Every volume of Science Comics offers a complete introduction to a particular topic—dinosaurs, the solar system, volcanoes, bats, robots, and more. These gorgeously illustrated graphic novels offer wildly entertaining views of their subjects. Whether you're a fourth grader doing a natural science unit at school or a thirty-year-old with a secret passion for airplanes, these books are for you!

In this volume, join a pair of superheroes as they uncover the secrets of skyscrapers, from the great Egyptians pyramids to the world’s tallest building. Read along and learn how skyscrapers are a bold combination of applied physics, ingenuity, and a lot of hard work!

John Kerschbaum was born and raised on Long Island, New York. He has written and illustrated books for both children and adults. His work has appeared in MAD Magazine, The New York Times, The New Yorker, DC Comics, The Associated Press, Fantagraphics, Nickelodeon Magazine, The Cousteau Society, KLUTZ Books, Disney Adventures Magazine, and MTV, as well as many comics anthologies. In 2008, he contributed illustrations and created a fold-out poster puzzle for The Metropolitan Museum of Art’s Family Map which is still being enjoyed by visitors a decade later. He currently resides in Queens with his wife and daughter.

Praise for the Science Comics series:

"This series—written by a handful of authors—seems determined to offer a useful introduction to anything a curious grade-school student might wonder about. The insight behind these books is a powerful one. So much information about the world around us is actually better conveyed visually, through charts, illustrations, and sequential panels, than purely using words." —New York Times

"Like having a Time Life Science Library in comic books. Which is awesome!" —Popular Science