Three Years in Wonderland: The Disney Brothers, C. V. Wood, and the Making of the Great American Theme Park (Hardcover) 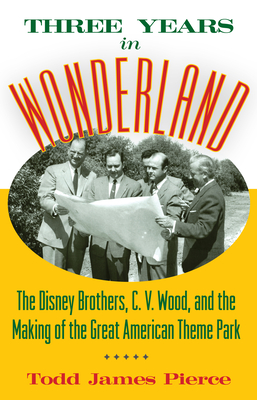 Three Years in Wonderland: The Disney Brothers, C. V. Wood, and the Making of the Great American Theme Park (Hardcover)


Not On Our Shelves—Ships in 1-5 Days
While the success of Disneyland is largely credited to Walt and Roy Disney, there was a third, mostly forgotten dynamo instrumental to the development of the park--fast-talking Texan C. V. Wood. Three Years in Wonderland presents the never-before-told, full story of "the happiest place on earth." Using information from over one hundred unpublished interviews, Todd James Pierce lays down the arc of Disneyland's development from an idea to a paragon of entertainment. In the early 1950s, the Disney brothers hired Wood and his team to develop a feasibility study for an amusement park that Walt wanted to build in southern California. "Woody" quickly became a central figure. In 1954, Roy hired him as Disneyland's first official employee, its first general manager, and appointed him vice president of Disneyland, Inc., where Walt's authority only exceeded Wood's authority. A brilliant project manager, Wood was also a con artist of sorts. Previously, he had forged his university diploma. A smooth-talker drawn to Hollywood, the first general manager of Disneyland valued money over art. As relations soured between Wood and the Disney brothers, Wood found creative ways to increase his income, leveraging his position for personal fame. Eventually, tensions at the Disney park reached a boiling point, with Walt demanding Wood be fired. In compelling detail, Three Years in Wonderland lays out the struggles and rewards of building the world's first cinematic theme park and convincing the American public that a $17 million amusement park was the ideal place for a family vacation. The early experience of Walt Disney, Roy Disney, and C. V. Wood is one of the most captivating untold stories in the history of Hollywood. Pierce interviewed dozens of individuals who enjoyed long careers at the Walt Disney Company as well as dozens of individuals who--like C. V. Wood--helped develop the park but then left the company for good once the park opened. Through much research and many interviews, Three Years in Wonderland offers readers a rare opportunity to stand shoulder-to-shoulder with the people who built the best-known theme park in the world.
Todd James Pierce is professor of literature at California Polytechnic State University in San Luis Obispo, California. He is author of Newsworld, which won the Drue Heinz Literature Prize, and The Life and Times of Ward Kimball: Maverick of Disney Animation, the latter published by University Press of Mississippi. His work has appeared in over seventy magazines and journals, including the Harvard Review, the Georgia Review, and the North American Review.