Driven to Ride: The True Story of an Elite Athlete Who Rebuilt His Leg, His Life, and His Career (Hardcover) 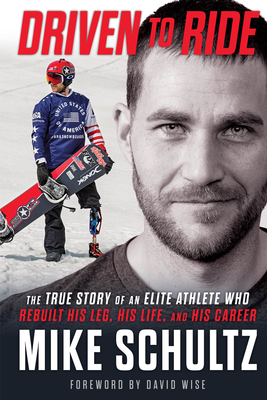 Driven to Ride: The True Story of an Elite Athlete Who Rebuilt His Leg, His Life, and His Career (Hardcover)

When "Monster" Mike Schultz won snowboarding gold in Pyeongchang, South Korea, it was the culmination of a decade of reinvention, in every sense of the word.

Ten years earlier he'd lain bleeding on the side of a mountain after a devastating snowmobile accident. Now he stood tall on the Paralympic podium, supported by a prosthetic knee and foot of his own creation.

Driven to Ride chronicles Schultz's improbable journey following a lifesaving amputation. From a place of debilitating pain and depression, he tapped into the same sense of adventure that had once taken him to the top of competitive snowmobile racing and followed it to the pinnacle of an entirely new sport: adaptive snowboarding.

As he launched himself into the world of adaptive sports, Schultz's ambition was only tempered by his need for better equipment—prostheses that could withstand the vibrations of a motocross bike or the impact of rough terrain.

His obsessive tinkering, without any formal engineering background, has presented yet another new path designing innovative prostheses for athletes and wounded military veterans.

Inspiring and thrilling in equal measure, this is a singular story of uncommon strength, ingenuity, and seizing golden opportunities.
Mike Schultz won gold and silver medals in snowboarding at the 2018 Winter Paralympics in Pyeongchang. He has won numerous X Games medals in motocross, snocross, snowbike, and snowboarding. Schultz is the founder of BioDapt, engineering durable and versatile prostheses for athletes and military veterans around the world.

Matt Higgins has written for The New York Times, The Village Voice, Popular Mechanics, Outside, and ESPN.com. He is the author of Bird Dream: Adventures at the Extremes of Human Flight (Penguin Press, 2014) which was a 2015 longlist selection for the PEN/ESPN Award for Literary Sportswriting.

David Wise is a freestyle skier who has won two Olympic gold medals (in 2014 and 2018) and four X Games gold medals. He is a halfpipe world champion.