Championship Behaviors: A Model for Competitive Excellence in Sports (Hardcover) 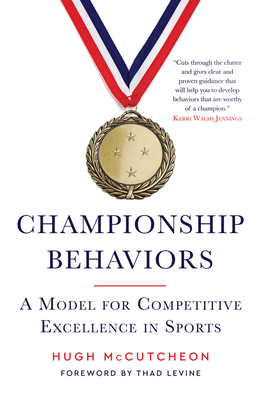 Championship Behaviors: A Model for Competitive Excellence in Sports (Hardcover)

Championship results require championship behaviors—it’s as simple as that. In this essential book, Hugh McCutcheon provides a proven framework for competitive excellence based in motor learning, psychology, and decades of coaching experience and success.

Championship Behaviors provides athletes, parents of athletes, and coaches a defined path to the "how" of significant achievement while simply and clearly explaining the research behind the "why." McCutcheon speaks to the need for aspiring athletes to work, learn, and compete and the responsibility coaches have to teach, coach, and mentor. As he says, "We won’t always have five-star talent, but we can often make up the difference by being five-star teachers, learners, and competitors."
A sought-after coach and consultant, McCutcheon also illuminates the value of integrating the physical, mental, and social aspects of sport to maximize chances of competitive success.
Born and raised in New Zealand, Hugh McCutcheon was inducted into the International Volleyball Hall of Fame in 2018. He is best known as the former head coach of the US men's national volleyball team (Gold Medalists, Beijing Olympics, 2008) and the former head coach of the US women's national volleyball team (Silver Medalists, London Olympics, 2012). Hugh stands as one of only three coaches to win medals with both genders and the only coach in USA Olympic history to have podium finishes with a men’s and women’s team. In 2008, he was named Olympic Coach of the Year. He currently coaches at the University of Minnesota.