Making It Through: Bosnian Survivors Sharing Stories of Trauma, Transcendence, and Truth (Hardcover) 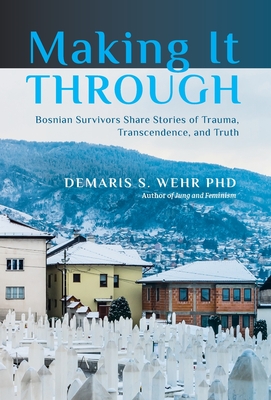 Making It Through: Bosnian Survivors Sharing Stories of Trauma, Transcendence, and Truth (Hardcover)

Bosnia, once the proud multicultural heartland of Yugoslavia, its villages treasured for Ottoman-era mosques, arched stone bridges, and red-tiled roofs, lay in ruins in 1995, destroyed by three-and-a-half years of murder and rape known to the world as ethnic cleansing.

Dr. Demaris Wehr, Quaker, Jungian therapist, peacebuilder, and the author of Jung and Feminism (Beacon Press), came to Bosnia after the war to assist in peacebuilding trainings, and she returned several times to bear witness as survivors of the genocide told her their stories in one-on-one interviews. She asked each of them, "How did you make it through?"

A pattern became apparent. Amid the chaos, the rupture of all they had once cherished, each of these individuals had found a powerful internal resolve, an overarching personal value such as family, faith, integrity, or duty that held them steady during these turbulent times.

No matter the era, humanity seems destined to be blindsided by arisings of hatred and divisiveness, projection and scapegoating. In Making It Through, eight ordinary Bosnians demonstrate ways we can endure and be strengthened and changed by adversity. Despite unimaginable horrors, when we find our centerpost and remain true to it, not only survival, but forgiveness, peace, and the impetus to work for a loving, inclusive future is possible.