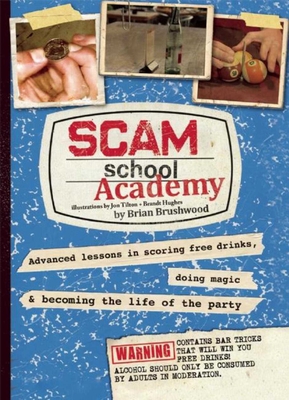 
Not On Our Shelves—Ships in 1-5 Days
Whether you’re trying to impress your friends or the girl across the bar, Scam School Academy is the ultimate guide to not impressing everyone around, but getting yourself some free drinks. With over eighty insane tricks, Scam School Graduate is the most advanced magic instruction book created to date.

You become the life of the party (or the bar) with amazing tricks, including:

The Jack-O-Lantern
Stump them for Free Beers
Coffee Creamer Flamethrower
The Human Blockhead
Eat Ball of Fire
Be A (Fake) Lie Detector
Win Cash at Darts
And many more!

Not only does Scam School Academy allow you to learn tricks with unprecedented depth, but there are hundreds of photographs to show you step-by-step on how to pull these clever scams off. Imagine the eye-popping surprise on your friend’s face when you summon smoke from nowhere or the shock on a girl’s face when you read her mind!

Imagine knowing that in any bar, in any situation, you can be entertaining enough to spend the whole night drinking for free. That’s where Scam School Academy comes in!
Brian Brushwood has been touring nationally and internationally with his “Bizarre Magic Show,” which is a thrill-ride mash-up of dangerous stunts, fire-eating, mind-reading, and comedy magic. He’s appeared on the Tonight Show with Jay Leno, as well as dozens of national television programs. Brian is the author of five books and lives in Austin, Texas.