Among the Ruins: The Decline and Fall of the Roman Catholic Church (Hardcover) 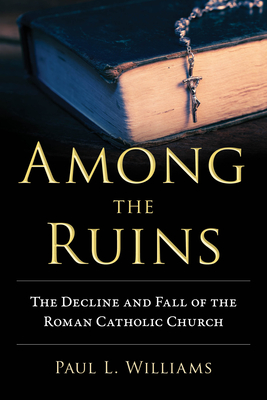 Among the Ruins: The Decline and Fall of the Roman Catholic Church (Hardcover)


Special Order—Subject to Availability
This critical review of the Roman Catholic Church since the pivotal changes initiated in the 1960s by Vatican II paints a disturbing picture of decline and corruption. Dr. Paul L. Williams, a self-professed Tridentine or traditionalist Catholic, traces the various factors that have caused the Church to suffer cataclysmic losses in all aspects of its life and worship in recent decades. Williams illustrates the decline with telling statistics showing the stark difference between the robust number of clergy members, parishes, schools, and active church-going Catholics in 1965 versus the comparatively paltry number today.

The author is highly critical of Popes Paul VI, John Paul II, Benedict XVI, and Francis for steering the church so far away from its traditional teachings and for a lack of oversight that allowed corruption to fester. Symptomatic of this failure of leadership are the recent pedophilia scandals, the ongoing financial corruption, a gay prostitution ring inside the Vatican, and criminal investigations of connections between the Holy See and organized crime.

This unflinching critique from a devoted, lifelong Catholic is a wakeup call to all Catholics to restore their church to its former levels of moral leadership and influence.
Paul L. Williams, PhD, is a journalist and the author of Operation Gladio, The Vatican Exposed, Crescent Moon Rising, The Day of Islam, Osama's Revenge, and The Al Qaeda Connection, among other books. The winner of three first-place Keystone Press Awards for journalism, he has written articles for major news outlets, including USA Today, the Wall Street Journal, and National Review. He has also served as a consultant for the FBI, editor and publisher of the Metro (Scranton, PA), and an adjunct professor of humanities at the University of Scranton.
“A masterfully written and documented exposé. This is an account every American and every Catholic must read if they believe in the importance of true faith and holding the leaders of the Catholic Church, the US government, and the CIA accountable for horrific crimes against humanity.”

—Kevin M. Shipp, former CIA officer and author of From the Company of Shadows

“A meticulously researched body of work that breathes life into the words of Francis Bacon, who wisely observed, ‘If money be not thy servant, it will be thy master.’ Paul Williams’s book is a stunning indictment of the insidious nature of a once venerable but secretive institution that has been corrupted by the false leadership of weak and dishonest men, who chose to satisfy their personal desires by the manipulation of the covenant between man and God.”

“Completely engrossing, exceedingly well-researched, and terrifying in its implications. It should be mandatory reading.”

“Williams builds an excellent and defining case against the Vatican and its long history of . . . abuse.”