Stolen Legacy: Nazi Theft and the Quest for Justice at Krausenstrasse 17/18, Berlin (Paperback) 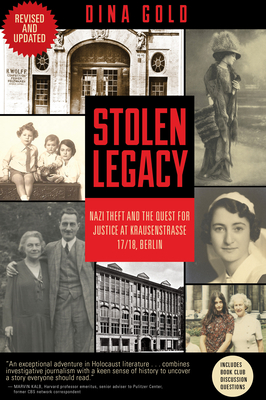 Stolen Legacy: Nazi Theft and the Quest for Justice at Krausenstrasse 17/18, Berlin (Paperback)


Not On Our Shelves—Ships in 1-5 Days
"This former BBC journalist's passionate search for justice is a suspenseful confrontation with World War II history. A fascinating journey." --Anne-Marie O'Connor, national bestselling author of The Lady in GoldDina Gold grew up hearing her grandmother's tales of the glamorous life in Berlin she once led before the Nazis came to power and her dreams of recovering a huge building she claimed belonged to the family - though she had no papers to prove ownership. When the Wall fell in 1989, Dina decided to battle for restitution. Built by Dina's great grandfather in 1910, the property was the business headquarters of the H. Wolff fur company, one of the largest and most successful in Germany during the early part of the last century. In 1937, the Victoria Insurance Company foreclosed on the mortgage and transferred ownership of Krausenstrasse 17/18 to the Reichsbahn, Hitler's railways, that later transported millions of Jews across Europe to the death camps. The Victoria, headed then by a German businessman and lawyer with connections to the very top of the Nazi Party, is still today one of Germany's leading insurance companies. But during the war it was part of a consortium insuring workshops at Auschwitz. When the Third Reich was defeated in 1945 the building lay in the Soviet sector - just past Checkpoint Charlie - and beyond legal reach.
Dina Gold was born and brought up in Britain. She is now an American citizen living in Washington, DC where she is on the board of the Jewish Community Center and co-chair of the Washington Jewish Film Festival. A senior editor at Moment magazine, she started her career in London as a financial journalist after postgraduate studies at Corpus Christi College, Oxford. Later, at the BBC, she worked as an investigative reporter and television producer.