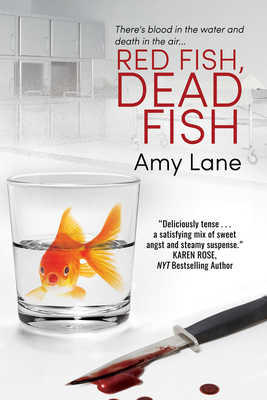 Backordered
(This book cannot be returned.)

This is book number 2 in the Fish Out of Water series.

Fish Out of Water: Book Two

They must work together to stop a psychopath—and save each other.

Two months ago Jackson Rivers got shot while trying to save Ellery Cramer’s life. Not only is Jackson still suffering from his wounds, the triggerman remains at large—and the body count is mounting.

Jackson and Ellery have been trying to track down Tim Owens since Jackson got out of the hospital, but Owens’s time as a member of the department makes the DA reluctant to turn over any stones. When Owens starts going after people Jackson knows, Ellery’s instincts hit red alert. Hurt in a scuffle with drug-dealing squatters and trying damned hard not to grieve for a childhood spent in hell, Jackson is weak and vulnerable when Owens strikes.

Jackson gets away, but the fallout from the encounter might kill him. It’s not doing Ellery any favors either. When a police detective is abducted—and Jackson and Ellery hold the key to finding her—Ellery finds out exactly what he’s made of. He’s not the corporate shark who believes in winning at all costs; he’s the frightened lover trying to keep the man he cares for from self-destructing in his own valor.

Amy Lane is a mother of two grown kids, two half-grown kids, two small dogs, and half-a-clowder of cats. A compulsive knitter who writes because she can’t silence the voices in her head, she adores fur-babies, knitting socks, and hawt menz, and she dislikes moths, cat boxes, and knuckleheaded macspazzmatrons. She is rarely found cooking, cleaning, or doing domestic chores, but she has been known to knit up an emergency hat/blanket/pair of socks for any occasion whatsoever or sometimes for no reason at all. Her award-winning writing has three flavors: twisty-purple alternative universe, angsty-orange contemporary, and sunshine-yellow happy. By necessity, she has learned to type like the wind. She’s been married for twenty-five-plus years to her beloved Mate and still believes in Twu Wuv, with a capital Twu and a capital Wuv, and she doesn’t see any reason at all for that to change.