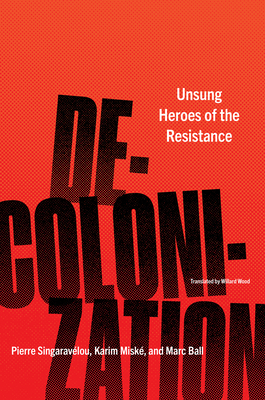 
Not On Our Shelves—Ships in 1-5 Days
Full of gripping historical vignettes and evocative photographs, an accessible overview of the dynamic figures who resisted colonization, from India, Senegal, and Algeria to Vietnam, Kenya, and Congo.

From the arrival of the Europeans, the peoples of Africa and Asia rose up. No one willingly accepts subjugation, but in order to one day regain freedom, you first and foremost need to stay alive. Faced with the Europeans’ machine guns, the colonized hit back in other ways: from civil disobedience to communist revolution, by way of soccer and literature. It was a struggle marked by infinite patience and unlimited determination, fought by heroic men and women now largely unknown.
Condensing a wealth of scholarly research into short, lively chapters, Decolonization brings their extraordinary stories to light:
Manikarnika Tambe, the Indian queen who led her troops into battle against the British;
Mary Nyanjiru, the Kenyan activist who spearheaded a protest in Nairobi;
Lamine Senghor, the Senegalese infantryman who became an anti-colonial militant in Paris;
and many more.
With them, a current of resistance swept the world, culminating in the independence of almost all the colonies in the 1960s. But at what price? In the atomic India of Indira Gandhi, in the Congo subjected to Mobutu’s dictatorship, or in a London shaken by the rioting of young immigrants, we can see just how crucial it is that we understand and learn from this painful history.
Pierre Singaravélou is British Academy Global Professor at King’s College London and Professor of History at Panthéon-Sorbonne University. He has published numerous works on the history of empires, colonialism, and globalization, including A Past of Possibilities (with Quentin Deluermoz) and France in the World (editor, with Patrick Boucheron, et al).

Karim Miské grew up in Paris and studied journalism in Dakar. Now resident in France, he makes documentary films on a wide range of subjects including deafness and the common roots between the Judaism and Islam. His first novel, Arab Jazz, won the Grand Prix de Littérature Policière and the Prix du Goéland Masqué.

Marc Ball is a documentary filmmaker whose films set out to describe the world around us from the people’s perspective. He has directed, with Karim Miské, Tunisie, les voix de la revolution, for Arte, and Police, illégitime violence, for France 3 and Public Sénat.

Willard Wood grew up in France and has translated more than thirty works of fiction and nonfiction from the French. He has won the Lewis Galantière Award for Literary Translation and received a National Endowment for the Arts Fellowship in Translation. He lives in Norfolk, Connecticut.
“[The authors] pay moving tribute to the ‘iron will’ of generations of people who found injustice ‘more unbearable than death itself.’…a valuable overview of the people and forces behind decolonization.” —Publishers Weekly

“Many people assume that decolonization was handed down benevolently from above. Nothing could be further from the truth. This book tells the extraordinary story of how the most oppressed people on the planet struggled against and overthrew the world’s most powerful empires. Gripping, powerful, timely—don’t miss this book.” —Jason Hickel, author of The Divide and Less is More

“An eye-opening collection of stories, portraits, and images that powerfully capture the resilience and courage of the women and men who resisted colonialism over two hundred years. A timely intervention and a page-turning read.” —Robert Gildea, author of Empires of the Mind: The Colonial Past and the Politics of the Present

“The authors of Decolonization unpack and reimagine what is often written about the end of European empires. The book mirrors the very creativity, dynamism, and unpredictability of its subjects—the men and women who endured colonialism and fought for independence. Global in scope, but deeply personal in content, Decolonization is guaranteed to provoke and inspire its readers to think anew about the making of the postcolonial world.” —J. P. Daughton, author of In the Forest of No Joy: The Congo-Océan Railroad and the Tragedy of French Colonialism

“Decolonization as you’ve never seen it before…the story of the European domination of many African and Asian populations is told not from the perspective of the colonizers, but of the colonized. Who are presented not as passive victims, but as ‘actors in their own story.’” —Télérama

“Striking…This panorama inverts the focus to recount from the point of view of the colonized 150 years of struggle against the subjugation of Africa and Asia.” —Afrique Magazine