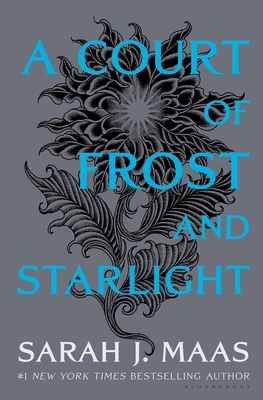 This is book number 4 in the A Court of Thorns and Roses series.

A tender addition to the #1 New York Times bestselling Court of Thorns and Roses series by Sarah J. Maas, bridging the events of A Court of Wings and Ruin and upcoming books.

Feyre, Rhysand, and their friends are still busy rebuilding the Night Court and the vastly altered world beyond, recovering from the war that changed everything. But Winter Solstice is finally approaching, and with it, the joy of a hard-earned reprieve.

Yet even the festive atmosphere can’t keep the shadows of the past from looming. As Feyre navigates her first Winter Solstice as High Lady, her concern for those dearest to her deepens. They have more wounds than she anticipated—scars that will have a far-reaching impact on the future of their court.
Bridging the events of A Court of Wings and Ruin with the later books in the series, A Court of Frost and Starlight explores the far-reaching effects of a devastating war and the fierce love between friends.

Sarah J. Maas is the #1 New York Times and internationally bestselling author of the Court of Thorns and Roses and the Crescent City series, as well as the Throne of Glass series. Her books are published in more than thirty-seven languages. A New York native, Sarah lives in Pennsylvania with her husband, son, and dog.

“Simply dazzles.” - starred review, Booklist on A COURT OF THORNS AND ROSES

“Passionate, violent, sexy and daring…. A true page-turner.” - USA Today on A COURT OF THORNS AND ROSES

“Suspense, romance, intrigue and action. This is not a book to be missed!” - Huffington Post on A COURT OF THORNS AND ROSES

“Vicious and intoxicating…. A dazzling world, complex characters and sizzling romance.” - Top Pick, RT Book Reviews on A COURT OF THORNS AND ROSES

“A sexy, action-packed fairytale.” - Bustle on A COURT OF THORNS AND ROSES

“Fiercely romantic, irresistibly sexy and hypnotically magical. A veritable feast for the senses.” - USA Today on A COURT OF MIST AND FURY

“Hits the spot for fans of dark, lush, sexy fantasy.” - Kirkus Reviews on A COURT OF MIST AND FURY

“An immersive, satisfying read.” - Publishers Weekly on A COURT OF MIST AND FURY

“Darkly sexy and thrilling.” - Bustle on A COURT OF MIST AND FURY

“Fast-paced and explosively action-packed.” - Booklist on A COURT OF WINGS AND RUIN

“The plot manages to seduce you with its alluring characters, irresistible world and never-ending action, leaving you craving more.” - RT Book Reviews on A COURT OF WINGS AND RUIN