I Feel Love: MDMA and the Quest for Connection in a Fractured World (Hardcover) 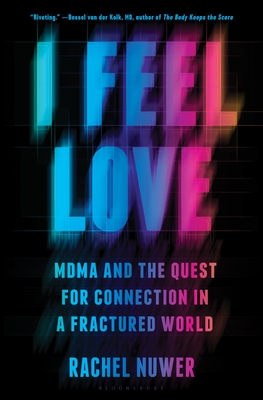 I Feel Love: MDMA and the Quest for Connection in a Fractured World (Hardcover)

The unlikely story of how the psychedelic drug MDMA emerged from the shadows to the forefront of a medical revolution--and the potential it may hold to help us thrive.

Few drugs in history have generated as much controversy as MDMA--or held as much promise. Once vilified as a Schedule I substance that would supposedly eat holes in users’ brains, MDMA (also known as Molly or Ecstasy) is now being hailed as a therapeutic agent that could transform the field of mental health and outpace psilocybin and ketamine as the first psychedelic approved for widespread clinical use. In I Feel Love, science journalist Rachel Nuwer separates fact from fantasy, hope from hype, in the drug’s contested history and still-evolving future. Evidence from scientific trials suggests MDMA, properly administered, may be startlingly effective at relieving the effects of trauma. Results from other studies point to its usefulness for individual and couples therapy; for treating depression, alcohol addiction, and eating disorders; and for cultivating personal growth. Yet scientists are still racing to discover how MDMA achieves these outcomes, a mystery that is taking them into the inner recesses of the brain and the deep history of evolution. With its power to dismantle psychological defenses and induce feelings of empathy, self-compassion, and love, MDMA may answer profound questions about how we became human, and how to heal our broken social bonds.

From cutting-edge labs to pulsing club floors to the intimacy of the therapist’s couch, Nuwer guides readers through a cultural and scientific upheaval that stands to rewrite our understanding of our brains, our selves, and the space between.

Rachel Nuwer is an award-winning science journalist who regularly contributes to the New York Times, National Geographic, Scientific American, and many other publications. Her reporting for the New York Times broke the news globally about the MDMA Phase III clinical trial and was highlighted by Michael Pollan, Ezra Klein, and Tim Ferriss, among other thought leaders. In 2022, Nuwer was among the inaugural recipients of the Ferriss–UC Berkeley Psychedelic Journalism Fellowship. She holds master's degrees in applied ecology and in science journalism. Her first book, Poached: Inside the Dark World of Wildlife Trafficking, took her to a dozen countries to investigate the multibillion-dollar illegal wildlife trade. She lives in Brooklyn.

“A meticulously researched and lucidly written examination of the potential of MDMA to be used as a tool in therapy to help process trauma and loss, and, ultimately, find joy. I entered the book a skeptic and emerged a believer. It's an important addition in the current movement to explore the use of previously demonized drugs to help people improve their lives.” —David Sheff, New York Times-bestselling author of BEAUTIFUL BOY

"Engagingly presents rigorous research, enriched by fascinating anecdotes and character sketches, to document the vagaries and victories, the scientific and human challenges, in the history of the human-made molecule MDMA as it has made its way from accidental discovery to party drug to a promising adjunct in the treatment of many of our most daunting mental health challenges." - Gabor Mate, MD, New York Times bestselling author of THE MYTH OF NORMAL and IN THE REALM OF HUNGRY GHOSTS

“By focusing on the humans at all points of the [illegal wildlife] trade, Nuwer is able to offer something rare: a window onto the feelings and beliefs that drive it.” —Wall Street Journal on POACHED

“A compelling, lively, and highly informative read.” —Science on POACHED

“Nuwer's engaging and immersive reporting style...illuminates and animates the larger forces driving the trade that's wiping out our remaining wildlife.” —Sierra on POACHED