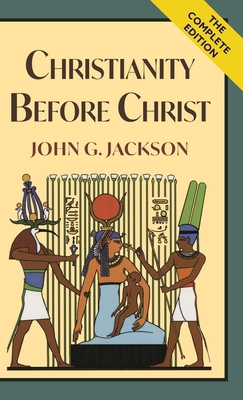 Explore the Ancient Origins of Christianity

"Orthodox Christians recognize him as a god, Unitarians as a man, and Rationalists as a myth," wrote John G. Jackson about the central figure of one of the world's great religions. A Pan-African scholar, Jackson has authored many books on the African origin of civilization, and lectured widely on world history and comparative religion.

Drawing upon the ancient lore and mythology of Babylon, Syria, India, Egypt, and Greece, in Christianity Before Christ Jackson reveals striking parallels to the traditional Christian story. "In Egypt, 3000 years ago, the birthdate of the sun-god was celebrated on the equivalent of] the 25th of December, the first day to noticeably lengthen after the day of the Winter Solstice." He continues, culture by culture, to unearth examples of virgin birth, performance of miracles, and symbols we associate with the Christian Church which had been in use long before that era.

Extensively quoting other scholars, Jackson presents his case as the disciplined researcher he is. An unapologetic atheist, he was cautioned to "be more discreet" when lecturing 1970's university students on the historical origin of Christianity. But one need not share Jackson's philosophy to enjoy this thorough, well-paced odyssey comparing archaic traditions with what we think of today as Christianity. World religion students, historians, and any free thinker will find this important and worthwhile reading.