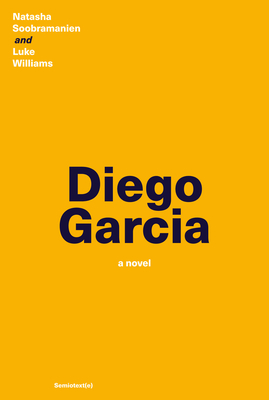 
On Our Shelves Now at:
Sad and funny and bitter and true, a novel about grief, discovering your own story, and trying to listen for those stories that are not yours to tell.

August 2014. Two friends, writers Damaris Caleemootoo and Oliver Pablo Herzberg, arrive in Edinburgh from London, the city that killed Daniel—his brother, her frenemy and loved by them both. Every day is different but the same. Trying to get to the library, they get distracted by bickering—will it rain or not and what should they do about their tanking bitcoin?—in the end failing to write or resist the sadness which follows them as they drift around the city.

On such a day they meet Diego, a poet. They learn that Diego’s mother was from the Chagos Archipelago, that she and her community were forced to leave their ancestral islands by soldiers in 1973 to make way for a military base. They become obsessed with this notorious episode in British history and the continuing resistance of the Chagossian people, and feel urged to write in solidarity. But how to share a story that is not theirs to tell?

Sad, funny and angry, this collaborative fiction builds on the true fact of another: a collaborative fiction created by the British and US governments to dispossess a people of their homeland.
Natasha Soobramanien and Luke Williams are the authors of Genie and Paul and The Echo Chamber, respectively. They used to live in Edinburgh but now live in Brussels, across the park from one another, where they meet up every day for a walk.
"Intimate yet expansive, heartbroken but unbowed, and a book about writing that is anything but solipsistic, it’s a stirring novel that lights a way forward for politically conscious fiction."
—Anthony Cummins, The Guardian

"I read Diego Garcia as a manual to navigate the present: pull any thread and follow where it takes you. Use your higher education to understand abstractions: cryptocurrency, legal fictions, national debt. Mistrust love, trust friendship. Exercise solidarity like a muscle. Come out collectively on the other side of sadness."
—Annette Weisser, Texte Zur Kunst