A Lucky Life: Gretzky, Crosby, Kawhi, and More From the Best Seat in the House (Hardcover) 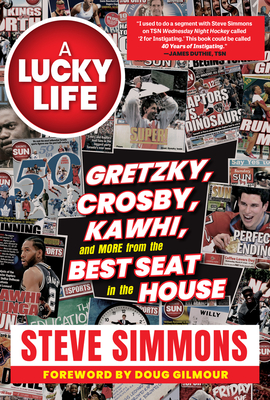 A Lucky Life: Gretzky, Crosby, Kawhi, and More From the Best Seat in the House (Hardcover)


Not On Our Shelves—Ships in 1-5 Days
For the past 40 years, Steve Simmons has had the best seat in the house, documenting the greatest sports moments in Canada and around the world. He was there when Wayne Gretzky won his first Stanley Cup. When Tiger Woods hit the first drive of his career at the Greater Milwaukee Open. When Usain Bolt crossed the Olympic finish line in an ecstatic blur.

He was there when Sidney Crosby scored the Golden Goal in 2010. When Kawhi Leonard hit the shot. When Joe Carter hit the home run and when Jose Bautista flipped his bat. When Michael Jordan retired in Chicago and when he came out of retirement to play his first game in Indianapolis.

In A Lucky Life, Simmons shares a selection of columns from his prolific career which celebrate sport at its best and most impactful. Added postscripts further illuminate historic events and towering figures with modern perspective and behind-the-scenes anecdotes.

Covering both larger-than-life achievements and quieter personal victories, this collection captures those moments in sport that stay with you long after the final buzzer.
Steve Simmons is a nationally syndicated Canadian journalist for the Toronto Sun who has covered sports for the past 40 years. He previously worked as a sports columnist for the Calgary Herald, Calgary Sun, London Free Press, The Globe and Mail, and The Hockey News.