Deal Junkie: A Half-Century of Deals that Brought the Biggest U.S. Retail and Apparel Companies to Answer the Moment and Prepare for the Future (Paperback) 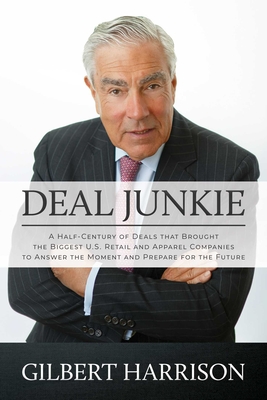 Deal Junkie: A Half-Century of Deals that Brought the Biggest U.S. Retail and Apparel Companies to Answer the Moment and Prepare for the Future (Paperback)


Not On Our Shelves—Ships in 1-5 Days
Bringing public and private companies to the bargaining table to merge, sell or divest themselves is an intense high-wire act—and Gilbert Harrison’s Deal Junkie is an in-depth account of how a great practitioner of the art form has pulled off these kinds of deals over the course of five-plus decades in the business.

If it were your job to bring a company to the bargaining table so it could merge, sell or divest, you had better have the stamina and guts as well as an intricate knowledge of how the human mind operates. Negotiating these kinds of deals is not for the faint of heart. But for over fifty years, one merchandising giant after another—Marshalls, TJ Maxx, Home Depot, Nine West, Kohl’s, Macy’s, Sears, CVS, The Limited, Dollar Tree, Eddie Bauer, Interparfums, Jeffrey Stores, and Jos A. Bank, to name a few—have relied on Gilbert Harrison to help them forge just these kinds of deals. Have they all been signed, sealed, and delivered? No, that’s not how the game works, and getting many of these deals negotiated is exactly that—a game. In all deals, nobody knows who to believe or not to believe, and what a company’s objectives are. But whether buying, selling or divesting, it has been Harrison’s job to try and figure out the secret competing interests of a company and to get those deals across the finish line.

Deal Junkie is the story of Gilbert Harrison’s rise to becoming one of the true lions in the field of retail, apparel, beauty, footwear and other merchandising and consumer-related companies.
Gilbert Harrison was born on Christmas Day, 1940, in New York City. His family moved shortly thereafter to New Haven, Connecticut, where he was raised. He attended the Wharton School and then the School of Law, both at the University of Pennsylvania. His first job in law took him back to New York City where he practiced corporate and securities law. After moving to Philadelphia, he joined Blank Rome as an associate lawyer. Several years later, he and a fellow lawyer struck out on their own, founding Financo in the early 1970s. Their business rose steadily over time, becoming one of the largest boutique investment firms in the country. Financo was bought by Lehman Brothers in the mid-1980s, and Harrison began a difficult but intensive four-year period under Lehman—one that ended with his dissatisfaction with the banking firm and his eventual return to the helm of Financo. By the early 1990s, Financo, with Harrison at the controls, continued to be one of the true leaders in retail and other merchandising acquisitions. By 2020, after a long and successful run, Harrison sold his shares in Financo and started Harrison Group, providing financial services and consulting to its clients. The author resides on the Upper East Side of New York City, as well as in Southampton and Palm Beach, Florida, with his wife of more than fifty-five years. He has three children, six grandchildren, and remains busy as ever in business.