Stories, Dice, and Rocks That Think: How Humans Learned to See the Future--and Shape It (Hardcover) 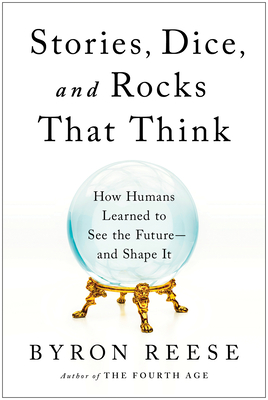 Stories, Dice, and Rocks That Think: How Humans Learned to See the Future--and Shape It (Hardcover)


On Our Shelves Now at:
"Byron Reese gets to the heart of what makes humans different from all others." —Midwest Book Review

What makes the human mind so unique? And how did we get this way?

This fascinating tale explores the three leaps in our history that made us what we are—and will change how you think about our future.

Look around. Clearly, we humans are radically different from the other creatures on this planet. But why? Where are the Bronze Age beavers? The Iron Age iguanas? In Stories, Dice, and Rocks That Think, Byron Reese argues that we owe our special status to our ability to imagine the future and recall the past, escaping the perpetual present that all other living creatures are trapped in.

Envisioning human history as the development of a societal superorganism he names Agora, Reese shows us how this escape enabled us to share knowledge on an unprecedented scale, and predict—and eventually master—the future.

Thoughtful, witty, and compulsively readable, Reese unravels our history as an intelligent species in three acts:
A fresh new look at the history and destiny of humanity, readers will come away from Stories, Dice, and Rocks that Think with a new understanding of what they are—not just another animal, but a creature with a mastery of time itself.
Byron Reese is an Austin-based entrepreneur with a quarter-century of experience building and running technology companies. He is a recognized authority on AI and holds a number of technology patents. In addition, he is a futurist with a strong conviction that technology will help bring about a new golden age of humanity. He gives talks around the world about how technology is changing work, education, and culture. He is the author of four books on technology, his most recent was described by The New York Times as "entertaining and engaging."

Bloomberg Businessweek credits Byron with having "quietly pioneered a new breed of media company." The Financial Times of London reported that he "is typical of the new wave of internet entrepreneurs out to turn the economics of the media industry on its head." Byron and his work have been featured in hundreds of news outlets, including New York Times, Washington Post, Entrepreneur Magazine, USA Today, Reader’s Digest, NPR, and the LA Times Magazine.