Secrets from the Hammock: Uncommon Wisdom for Uncommon Times (Hardcover) 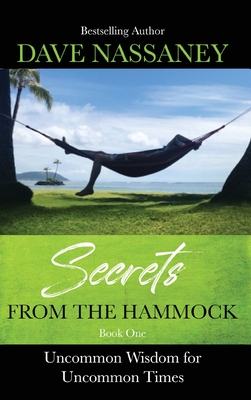 Secrets from the Hammock: Uncommon Wisdom for Uncommon Times (Hardcover)

Dave was twenty-one years old the first time he read the writings of King Solomon. He was the wisest king to ever live according to recorded history. The newly crowned Monarch asked God for wisdom to govern his people well. Not only did He grant Solomon's request, but also granted what he did not ask for, riches and honor.

Dave always wanted wisdom. At first, it seemed pretty pretentious of him to have the audacity to also ask such a thing from God. After all, who was he? Certainly not a King, in fact, a nobody. However, he hoped for it the same way a child hopes for Santa Clause to bring him a gift on Christmas Day.

From the moment Dave also asked for this wisdom as a young man, he suddenly encountered multiple times strangers would approach him and tell him what was bothering them. They didn't even understand why they were confiding in him, a stranger. Yet, they admitted they somehow trusted him and felt safe.

Dave writes his life experiences about three specific types of wisdom in this book while on his hammock (Mind Wisdom, Body Wisdom and Spirit Wisdom). Allow it to change your life.