The Matchmaker: A Spy in Berlin (Paperback) 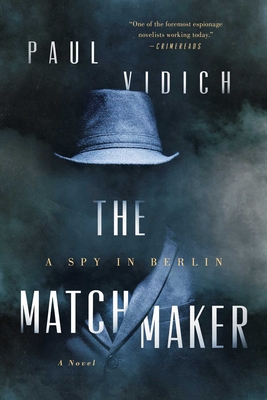 The Matchmaker: A Spy in Berlin (Paperback)


On Our Shelves Now at:
A New York Times Book Review Editors’ Choice

In the vein of Graham Greene and John le Carré, The Matchmaker delivers a chilling Cold War spy story set in West Berlin, where an American woman targeted by the Stasi must confront the truth behind her German husband's mysterious disappearance.

Berlin, 1989.  Protests across East Germany threaten the Iron Curtain and Communism is the ill man of Europe.

Anne Simpson, an American who works as a translator at the Joint Operations Refugee Committee, thinks she is in a normal marriage with a charming East German. But then her husband disappears, and the CIA and Western German intelligence arrive at her door.

Nothing about her marriage is as it seems. She had been targeted by the Matchmaker—a high level East German counterintelligence officer—who runs a network of Stasi agents. These agents are his "Romeos" who marry vulnerable women in West Berlin to provide them with cover as they report back to the Matchmaker. Anne has been married to a spy, and now he has disappeared, and is presumably dead.

The CIA are desperate to find the Matchmaker because of his close ties to the KGB.  They believe he can establish the truth about a high-ranking Soviet defector. They need Anne because she's the only person who has seen his face - from a photograph that her husband mistakenly left out in his office - and she is the CIA’s best chance to identify him before the Matchmaker escapes to Moscow. Time is running out as the Berlin Wall falls and chaos engulfs East Germany.

But what if Anne's husband is not dead? And what if Anne has her own motives for finding the Matchmaker to deliver a different type of justice?
Paul Vidich is the acclaimed author of The Matchmaker, The Mercenary, The Coldest Warrior, An Honorable Man, and The Good Assassin. His fiction and nonfiction have appeared in the Wall Street Journal, LitHub, CrimeReads, Fugue, The Nation, Narrative Magazine, and Wordriot. He lives in New York City.
"There is a casual elegance to Vidich’s spy fiction (now numbering five books), a seeming effortlessness that belies his superior craftsmanship. Every plot point, character motivation and turn of phrase veers toward the understated, but they are never underwritten. The Matchmaker is an ideal entrance into Vidich’s work, one that should compel new readers to plumb his backlist."
— Sarah Weinman

"Shades of Graham Greene, Eric Ambler and John le Carré hover over the pages of Paul Vidich’s The Matchmaker, a Cold War thriller set in West and East Berlin in the eventful years of 1989 and ’90. The innovative Mr. Vidich subverts expectations in ways that surprise."
— Tom Nolan

"With a capable female protagonist, Vidich brings a modern sensibility to the complex machinations of the traditional spy novel."
— Becky Meloan

"A woman’s life takes a stunning turn and a wall comes tumbling down in this tense Cold War spy drama. Intrigue, murder, and vengeance make for a darkly enjoyable read."
— Kirkus Reviews

"With a great narrative and powerful plot twists, the story comes to life and all is slowly revealed by the final chapter. This surely lives up to the standards of Graham Greene and John le Carré, as denoted in the dust jacket blurb. Kudos, Mr. Vidich, for an entertaining read that left me reminiscing of the days of the Cold War."
— Mystery and Suspense Magazine

"Vidich adds a welcome feminist twist to the familiar espionage theme of human lives trapped in the vice of competing and equally ruthless governments. From An Honorable Man (2016) through The Mercenary (2021), Vidich has established his position in the forefront of contemporary espionage novelists."
— Booklist (starred)

"The Matchmaker is an intelligent, atmospheric, richly written and quietly gripping spy novel. Vidich also deals sensitively with real moral issues around spying and there is a depth to his themes. In all, it is a very impressive achievement. It is still very early in the year, but I think that The Matchmaker will end up being one of the best spy novels of 2022."
— Jeff Popple

"The strength of the book is the recounting of historical events, many now forgotten or having occurred in another generation. Vidich vividly describes protests in the street and the suspenseful hours as East Berliners learn the order had been given to open the border. But the novel also raises questions such as what happened to the Stasi officials after the Wall came down in 1989. As noted in the book, practically nothing. And why not? History, it appears, is worth studying, for the lessons it delivers."
— Authorlink