Blood and Iron: The Rise and Fall of the German Empire (Paperback) 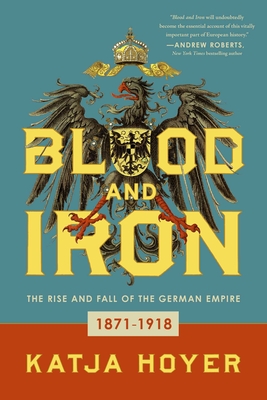 Blood and Iron: The Rise and Fall of the German Empire (Paperback)


On Our Shelves Now at:
In this vivid fifty-year history of Germany from 1871-1918—which inspired events that forever changed the European continent—here is the story of the Second Reich from its violent beginnings and rise to power to its calamitous defeat in the First World War.

Before 1871, Germany was not yet a nation but simply an idea.

Its founder, Otto von Bismarck, had a formidable task at hand. How would he bring thirty-nine individual states under the yoke of a single Kaiser?  How would he convince proud Prussians, Bavarians, and Rhinelanders to become Germans? Once united, could the young European nation wield enough power to rival the empires of Britain and France—all without destroying itself in the process?

In this unique study of five decades that changed the course of modern history, Katja Hoyer tells the story of the German Empire from its violent beginnings to its calamitous defeat in the First World War.

This often startling narrative is a dramatic tale of national self-discovery, social upheaval, and realpolitik that ended, as it started, in blood and iron.
Katja Hoyer is a German-British historian specializing in modern German history. She was born in East Germany and is a Fellow of the Royal Historical Society in London and a Visiting Research Fellow at King's College London. She is a columnist for the Washington Post and has written for History Today and the BBC's History Extra. Katja now lives in Sussex, England.
“Hoyer peppers her trim narrative with some lovely frills. The mark of a really good short book is its ability to inspire curiosity. Blood and Iron achieves just that. What this story reveals is how easily governmental institutions can be destroyed when people are led astray by intoxicating notions of a place in the sun. That, perhaps, is a lesson for us all.”
— Gerard DeGroot

“Superb… Hoyer roots the gathering unity of the German states in a ‘defensive nationalism’ caused by the Napoleonic Wars of the early 19th century and skillfully unveils how nationalism can come into being out of a sense of comparative inferiority. It’s hard to imagine a better, more up-to-date history of its subject.”
— Kirkus, Starred Review

"Hoyer’s well-researched and well-written book is the best biography of the Second Reich in years. It will undoubtedly become the essential account of this vitally important part of European history.”
— Andrew Roberts, New York Times bestselling author of Churchill: Walking with Destiny

"Splendidly lucid and readable: Katja Hoyer has managed to compress fifty years of great complexity into a compelling and comprehensible narrative—and it is a story that every European needs to know and to understand.”
— Neil MacGregor, author of Germany: Memories of a Nation

"Hoyer brings this dense period of German history to life with a lightness of touch that complements her impressive scholarship. A deeply satisfying read, highly recommended.”
— Julia Boyd, Los Angeles Times History Prize-winning author of Travelers in the Third Reich

"Concise and incisive, this sparkling examination of the rise and fall of the Second Reich is an excellent introduction to a crucial period of German history.”
— Tim Blanning, author of Frederick the Great

"Hoyer has written a balanced and hugely accessible introduction to the age when Germany became Germany.”
— Oliver Moody, The Times (London)

“An excellent book on the rise and fall of the German Empire from 1871 to 1918 that is packed with detail and illuminating insights. She shows very effectively the changes in German foreign policy after Bismarck’s fall from power, and the more provocative stance of Kaiser Wilhelm’s world policy that contributed to the outbreak of the First World War. Overall, this book fills a gap in our understanding of the Second Reich, and it helps us to understand more clearly the reasons for its failure.”
— Frank McDonough, author of The Hitler Years

"Historian Hoyer debuts with an accessible chronicle of Germany’s Second Reich focused on its two most important leaders. She makes excellent use of secondary sources and lucidly explains how regional and political differences helped foster the 'internal strife, division and stagnation' that Wilhelm hoped to overcome by going to war. The result is a solid introduction to how modern Germany came into being."
— Publishers Weekly

"Hoyer's beautifully written book is the most accessible account of the Second Reich’s history to date. The historian is thoughtful and dispassionate. The tale is compellingly told. The title, too, is apt; Germany’s history is a story of blood and iron."
— Sean Durns,

“A concise, well-written study, Blood and Iron deftly blends narrative with analysis to set a crucial era in the context from which the German state emerged.”