The Turtle and the Dreamboat: The Cold War Flights That Forever Changed the Course of Global Aviation (Hardcover) 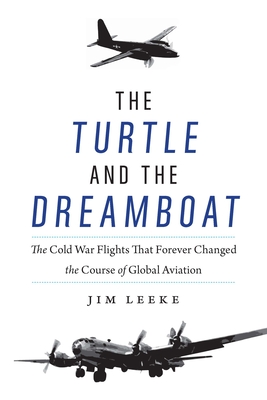 The Turtle and the Dreamboat: The Cold War Flights That Forever Changed the Course of Global Aviation (Hardcover)


In Stock—Click for Locations
The ‘Turtle’ and the ‘Dreamboat’  is the first detailed account of the race for long-distance flight records between the U.S. Army and U.S. Navy less than fourteen months after World War II. The flights were risky and unprecedented. Each service intended to demonstrate its offensive capabilities during the dawning nuclear age, a time when America was realigning its military structure and preparing to create a new armed service—the United States Air Force.

The first week of October 1946 saw the conclusion of both record-breaking, nonstop flights by the military fliers. The first aircraft, a two-engine U.S. Navy P2V Neptune patrol plane nicknamed the Truculent Turtle, flew more than eleven thousand miles from Perth, Western Australia, to Columbus, Ohio. The Turtle carried four war-honed pilots and a young kangaroo as a passenger. The second plane, a four-engine U.S. Army B-29 Superfortress bomber dubbed the Pacusan Dreamboat, flew nearly ten thousand miles from Honolulu to Cairo via the Arctic. Although presented as a friendly rivalry, the two flights were anything but collegial. These military missions were meant to capture public opinion and establish aviation leadership within the coming Department of Defense.

Both audacious flights above oceans, deserts, mountains, and icecaps helped to shape the future of worldwide commercial aviation, greatly reducing the length and costs of international routes. Jim Leeke provides an account of the remarkable and record-breaking flights that forever changed aviation.

Jim Leeke is a former news journalist, retired copywriter and creative director, and a U.S. Navy veteran. He is the author of several books, including The Best Team Over There: The Untold Story of Grover Cleveland Alexander and the Great War (Nebraska, 2021) and From the Dugouts to the Trenches: Baseball during the Great War (Nebraska, 2017).
"[The Turtle and the Dreamboat] offers an interesting footnote in the history of aviation in America's post-war military services."—Steven C. Haack, Journal of America's Military Past

"The Turtle and the Dreamboat is an interesting book. It is fast paced and engrossing."—Tony Bruno, Cipher Brief

"Readers can now fly between North America and Europe or the Southern Hemisphere due in major part to the historical flights and flight crews of The Turtle and the Dreamboat. Aside from aviation history book shelves this book also belongs to those who read about explorers and feel simpatico with that special urge to do what has not been done. It is also a quite pleasant read."—Travel for Aircraft

“Never again will I take a transatlantic flight without thinking of the pioneering missions of the Turtle and the Dreamboat—sleek, superbly engineered aircraft piloted by war heroes who shattered the barriers of global travel.”—Anne R. Keene, author of The Cloudbuster Nine: The Untold Story of Ted Williams and the Baseball Team That Helped Win World War II

“A very readable and effective narrative of postwar flights that were largely forgotten by historians. The ‘Turtle’ and the ‘Dreamboat’  should find an eager audience among aviation, military aviation, and Cold War history enthusiasts and scholars. Strongly recommended.”—Ron Kaplan, executive director of the Ohio Air & Space Hall of Fame and Learning Center

“Well researched and superbly written, Jim Leeke’s The ‘Turtle’ and the ‘Dreamboat’  is a fascinating account of Cold War aviation. These two aircraft set the stage for long-distance global flight. A must-read.”—Mitchell Yockelson, author of The Paratrooper Generals: Matthew Ridgway, Maxwell Taylor, and the American Airborne from D-Day through Normandy

“The Turtle and the Dreamboat crews were true pioneers. Jim Leeke presents the tale of how their two aircraft paved the way for the thousands of planes flying around the world today and helps us to appreciate how we got here.”—Maj. Gen. Edward J. Mechenbier, U.S. Air Force (Ret.)