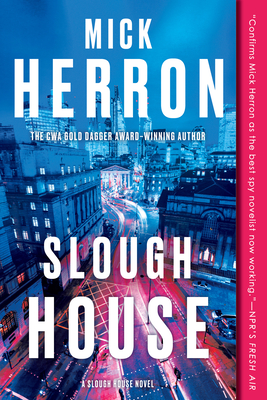 This is book number 7 in the Slough House series.

In his best and most ambitious novel yet, Mick Herron, “the le Carré of the future” (BBC), offers an unsparing look at the corrupt web of media, global finance, spycraft, and politics that power our modern world.

“This is a darker, scarier Herron. The gags are still there but the satire's more biting. The privatization of a secret service op and the manipulation of news is relevant and horribly credible.”—Ann Cleeves, author of the Vera Stanhope series

At Slough House—MI5’s London depository for demoted spies—Brexit has taken a toll. The “slow horses” have been pushed further into the cold, Slough House has been erased from official records, and its members are dying in unusual circumstances, at an unusual clip. No wonder Jackson Lamb's crew is feeling paranoid. But are they actually targets?

With a new populist movement taking hold of London's streets and the old order ensuring that everything's for sale to the highest bidder, the world's a dangerous place for those deemed surplus. Jackson Lamb and the slow horses are in a fight for their lives as they navigate dizzying layers of lies, power, and death.
Mick Herron is a British novelist and short story writer who was born in Newcastle and studied English at Oxford. He is the author of the Slough House espionage series, four Oxford mysteries, and several standalone novels. His work has won the CWA Gold Dagger for Best Crime Novel, the Steel Dagger for Best Thriller, and the Ellery Queen Readers Award, and been nominated for the Macavity, Barry, Shamus, and Theakstons Novel of the Year Awards. He currently lives in Oxford and writes full-time.
Theakston Old Peculiar Crime Novel of the Year
CrimeReads Most Anticipated Crime Fiction of 2021
Reader's Digest 50 Best Fiction Books of 2021
The Times Best Thrillers of 2021
Irish Times Best Mysteries of 2021
Minneapolis Star-Tribune Best Books of 2021
The Sydner Morning Herald Best Books of 2021

“I'll tell you what, to have been lucky enough to play Smiley in one's career; and now go and play Jackson Lamb in Mick Herron's novels—the heir, in a way, to le Carré—is a terrific thing.”
—Gary Oldman

“Herron’s excellent series featuring a motley crew of sidelined MI5 agents united under the fearless leadership of the unforgettable Jackson Lamb, has grown ever-more reflective — if not downright prescient — of contemporary political machinations, and is all the richer for it.”
—The Boston Globe

“Out of a wickedly imagined version of MI5, [Herron] has spun works of diabolical plotting and high-spirited cynicism, their pages filled with sardonic wit, their characters approaching the surreal . . . Mr. Herron goes about this with bouncing black humor and a set of characters whose appearance and manner would be over the top in any other era. Happily for Mr. Herron—if alas for us—events continue to produce rich material for his special gifts, and we hope he is scribbling away making good use of it all.”
—Katherine A. Powers, The Wall Street Journal

“[Herron's] cleverly plotted page-turners are driven by dialogue that bristles with one-liners. Much of the humor comes from Herron’s sharp eye for the way bureaucracies, whether corporate or clandestine, function and malfunction. The world of Slough House is closer to The Office than to 007.”
—The Associated Press

“This is a darker, scarier Herron. The gags are still there but the satire's more biting. The privatization of a secret service op and the manipulation of news is relevant and horribly credible.”
—Ann Cleeves, author of the Vera Stanhope series

“A gripping thriller but wickedly funny too. I laughed long and hard.”
—Ian Rankin, author of the Inspector Rebus Novels

“Herron’s distinctive voice, marked by a dry wit and mordant sense of humour, runs through the series, and his latest work is no exception.”
—Financial Times

“Slough House is the best yet.”
—Times Literary Supplement (UK)

“Herron has certainly devised the most completely realised espionage universe since that peopled by George Smiley.”
—The Times (UK)

“Mick Herron is one of the finest writers of his generation.”
—Steve Cavanagh, author of the Eddie Flynn novels

“Mick Herron’s Slough House series has quietly become one of the greatest spy series the world has ever seen. And now a soon-to-be television adaptation starring Gary Oldman should make Herron and his heroes into household names”
—CrimeReads

“The recent passing of the late, great John le Carré leaves a gaping hole, so the arrival of his heir apparent’s new book could not be better timed.”
—Everything Zoomer

“Combining some of the cleverest dialogue in the genre with unexpected bursts of violence, Herron brings to the spy novel—not known in the post-Bond era for its sense of humor—an Elmore Leonard–like ability to make us laugh and cry almost simultaneously.”
—Bill Ott, Booklist, Starred Review

“Herron, an exceptional writer, paces his books brilliantly. He’s capable of prose that’s stark in places and beautiful in others. His action scenes hum without any wasted moments, and his dialogue is funny, or profane, or chilling, as each voice demands. Herron has the full toolkit, and he builds these stories so tight you can barely find the seams where the pieces meet.”
—Book and Film Globe

“Herron does a magnificent job keeping the assorted narrative balls aloft in a story that’s often gripping and even more often hilarious. This entry should garner him a slew of new American readers.”
—Publishers Weekly, Starred Review

“Once again, Herron captures the dramedy of the battle between spies and bureaucrats better than anyone else on either side.”
—Kirkus Reviews

“Revenge, betrayal, and gallows humor abound in Slough House, the seventh installment of Mick Herron’s ripping good series of spy novels. This time out, MI5’s disgraced spies are being hunted by Russian assassins and there’s no one they can trust to help them. Herron’s deft plotting and taut writing make his books the best spy thrillers being published today. Make room on your shelf beside LeCarre and Deighton. His books are fantastic, and Slough House is no exception.”
—David Enyeart, Next Chapter Booksellers (St. Paul, MN)

“I think this might be the best Jackson Lamb outing yet.”
—Christopher Brookmyre

“I enjoyed Slough House tremendously. Witty, clever and horribly on point. Lots to laugh about while being careful not to miss a word. This isn't a book to skim read.”
—Kit de Waal

“[Jackson Lamb] Herron's glorious creation propels the story to the bitter end where the non-stop barrage of jokes is fatally undercut by a final shocking twist.”
—Evening Standard

“Suspense, spycraft, dry wit and vulgar humor are all well-deployed in this satisfying work by Mr. Herron, whose style can accommodate everything from a tough action scene to a lyrical elegy.”
—Tom Nolan, The Wall Street Journal

“Herron writes squeakingly well-plotted spy thrillers. More than that, he composes—at the rate of a pulpist—the kind of efficient, darkly witty, tipped-with-imagery sentences that feel purpose-built to perforate my private daze of illiteracy. More than that, he’s a world-bringer, the creator of a still-growing fictional universe with its own gravity, lingo, and surface tension.”
—The Atlantic

“Herron blends character, place and espionage into a riveting melange that I’ve only encountered in the best of John le Carré or Len Deighton . . . Read one and you're hooked for the whole series.”
—The Globe and Mail

Praise for the Slough House novels

"[Herron] really is funny and his cynicism is belied, here and there, by flashes of the mingled tenderness and anger that seem to define Britain’s post-Brexit self-reflections."
—Charles Finch, USA Today

“[Herron is the] le Carré of the future . . . The characters are brilliant.”
—Patrick Neale on BBC’s The Oxford Book Club

“Heroic struggles, less-heroic failures and a shoot-out-cum-heist . . . with no let-up in the page turning throughout.”
—Esquire

"Slough House, in this winning series, is where incompetent or disgraced British spies spend their days on meaningless busywork. That is, unless they stumble into genuine espionage. Herron is a subtle stylist, and he strikes a perfect balance of big-hearted humor and thrilling spy stuff."
—The Seattle Times

“Hilarious and suspenseful . . . Sharper than most espionage fiction being written today and manages to stay uncannily contemporary.”
—St. Louis Post-Dispatch