Standing by the Wall: The Collected Slough House Novellas (Paperback) 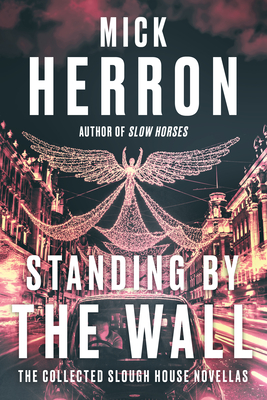 Standing by the Wall: The Collected Slough House Novellas (Paperback)

At last in one volume: the collected Slough House spy novellas, including the never-before-published Christmas interlude Standing by the Wall.

Espionage. Blackmail. Revenge. Cunning. Slapstick. State secrets dating back to the fall of the Berlin Wall. All this and more in a tight package of five novellas by Mick Herron, CWA Gold Dagger–winning author of Slow Horses. From the troubled recruitment of a new MI5 informant to a botched information transfer, Herron’s novellas capture the drama, humor, and high stakes of everyday life in the world of spycraft, a world rife with both legends and secrets, where thrill-seeking and loneliness are ubiquitous and deadly, and where the lines between friends, enemies, and lovers are perpetually blurred by circumstance and subterfuge.

For fans new and old, Standing by the Wall is an excellent introduction to the extended literary universe of Mick Herron’s Slow Horses. Collection includes: The List, The Marylebone Drop, The Catch, The Last Dead Letter, and Standing by the Wall.
Mick Herron is a British novelist and short story writer who was born in Newcastle and studied English at Oxford. He is the author of the Slough House espionage series, four Oxford mysteries, and several standalone novels. His work has won the CWA Gold Dagger for Best Crime Novel, the Steel Dagger for Best Thriller, and the Ellery Queen Readers Award, and been nominated for the Macavity, Barry, Shamus, and Theakstons Novel of the Year Awards. He currently lives in Oxford and writes full-time.
Praise for Mick Herron

“Suspense, spycraft, dry wit and vulgar humor are all well-deployed in this satisfying work by Mr. Herron, whose style can accommodate everything from a tough action scene to a lyrical elegy.”
—The Wall Street Journal

“Herron writes squeakingly well-plotted spy thrillers. More than that, he composes—at the rate of a pulpist—the kind of efficient, darkly witty, tipped-with-imagery sentences that feel purpose-built to perforate my private daze of illiteracy.”
—The Atlantic